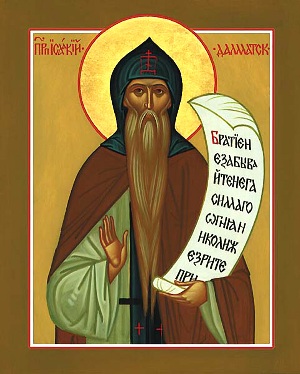 Our venerable father Isaac the Confessor (also known as Isaac of Dalmatia) is commemorated by the Orthodox Church on March 22, May 30, and August 3. He is known for his struggle against the Arian heresy during the reigns of the Arian emperor Valens and the Orthodox emperor Theodosius.

The next day, Isaac once again ran out to warn the emperor. Valens, moved by Isaac's boldness and sincerity, was almost persuaded to do as he asked. However, one of his advisers (an Arian) convinced him not to do as Isaac requested. On the third day, Isaac's manner became more confrontational. Tradition says that he ran up to the emperor's horse and grabbed it by the reins. Once again, he begged Valens to give the Church its freedom, this time also adding a warning of divine retribution if Valens did not fulfill his request. Valens, offended at Isaac's audacity, had him thrown into a deep pit, filled with mud and thorns. This would not hinder the saint of God, however. 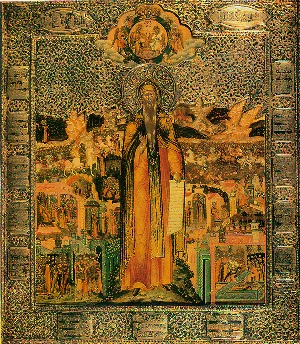 Isaac is believed by some authorities to have died in A.D. 383, although others place his death around A.D. 396. However, neither of these might be accurate; the life of John Chrysostom includes mention of St. Isaac living into the fifth century. At least one account says that John, as bishop of Constantinople, disapproved of monks who roamed the streets visiting friends in their private houses, out of his concern that the monastic reputation would be marred. Those who did not approve of Chrysostom's new rules brought their complaints to Isaac, who in turn is said to have voiced them at the Synod of the Oak in A.D. 403. At the end of his life, he entrusted the leadership of his monastery to his closest disciple, Dalmatus (later himself glorified by the Church). Isaac's monastery was later to be named "Dalmatian" after this disciple, hence Isaac's later appellation, "of Dalmatia."

The image of God was truly preserved in you, O Father,
for you took up the Cross and followed Christ.
By so doing doing you taught us to disregard the flesh for it passes away
but to care instead for the soul, since it is immortal.
Therefore your spirit, venerable Isaac, rejoices with the angels.

As a faithful favorite of God you became enflamed with zeal for the Church of Christ
and drew in the reins of the emperor Valens, O venerable one;
you prophetically foretold to him the captivity of the Church and of his own wretched death.
Therefore, venerable Isaac, ceaselessly pray for us who honor you.