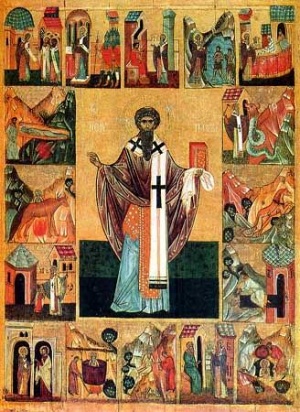 A 15th-century Russian icon of St. Hypatius, from the Hypatian Monastery.

Hieromartyr Hypatius the Wonderworker and Bishop of Gangra ((Greek)

Ὁ Ἅγιος Ὑπάτιος ὁ Ἱερομάρτυρας Ἐπίσκοπος Γαγγρῶν, †326 AD) was bishop of the city of Gangra in Paphlagonia, Asia Minor. In the year 325 he participated in the First Ecumenical Council at Nicea, where he supported Saint Athanasius the Great against the Arian heresy. The Orthodox Church celebrates his feast day on March 31.

When St Hypatius was returning in 326 from Constantinople to Gangra, followers of the schismatics Novatus and Felicissimus fell upon him in a desolate place. The heretics ran him through with swords and spears, and threw him into a swamp. Like the Protomartyr Stephen, St Hypatius prayed for his murderers. An Arian woman who was amongst the attackers, struck him on the head with a rock – delivering a fatal blow.[note 1] The murderers hid his body in a cave, where a Christian who kept straw there found his body. Recognizing the bishop's body, he hastened to the city to report this, and the inhabitants of Gangra piously buried their beloved Archpastor. 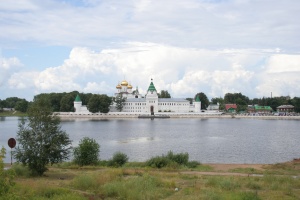 The Ipatiev (Hypatian) Monastery, as seen from across the Kostroma River, Russia.

After his death, the relics of Saint Hypatius were famous for numerous miracles, particularly for casting out demons and for healing the sick.

From of old the hieromartyr Hypatius was particularly venerated in the Russian land. Thus in the year 1330 the Ipatiev monastery (Hypatian Monastery) was built at Kostroma, on the place where the Mother of God appeared with the Pre-eternal Christ Child, the Apostle Philip, and the Hieromartyr Hypatius, Bishop of Gangra. This monastery later occupied a significant place in the spiritual and social life of the nation, particularly during the Time of Troubles.

The ancient copies of the Life of the hieromartyr Hypatius were widely distributed in Russian literature, and one of these was incorporated into The Reading Menaion of Metropolitan Macarius (1542-1564). In this Life there is an account of the appearance of the Savior to St Hypatius on the eve of the martyr's death.

The entry for the Saint's Feast consists of his Life, some prayers, and words of praise and instruction. The pious veneration of St Hypatius was also expressed in Russian liturgical compositions.

During the nineteenth century a new service was written for the hieromartyr Hypatius, distinct from the services written by St Joseph the Studite, contained in the March Menaion.