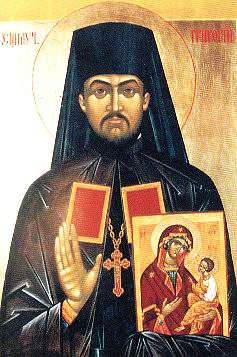 Holy Hieromartyr Grigol Peradze was a famous Georgian ecclesiastic figure, theologian, historian, archimandrite, Doctor of History, and Professor of the early twentieth century. Like Christ Himself, Archimandrite Grigol died for having taken upon himself the sin of another. His feast day is December 6.

Archimandrite Grigol Peradze was born on August 31, 1899 in the village of Bakurtsikhe, in the Sighnaghi district of Kakheti, in Eastern Georgia. His father, Romanoz Peradze, was a priest.

In 1918, Peradze graduated from the Tbilisi Theological Seminary. He then continued his studies at the Tbilisi State University graduating in 1921. On February 25, 1921, Georgia was occupied by Soviet forces that had taken over the government of Russia. After his graduation he began to teach at the university, but the Church of Georgia sent him to Germany in November 1921 to study theology.

In early 1927, Grigol moved to England to continue his academic career. In England he found in the library collections of the British Museum and Oxford University old patristic manuscripts. In July 1927, he was named an Associate Professor at the University of Bonn, to which he returned to lecture on the history of Georgian and Armenian literature until 1932.

In 1931, Grigol Peradze entered a monastic life and was tonsured a monk. He was then ordained a priest in the Greek Orthodox Cathedral of London and was appointed dean of the St. Nino Georgian Orthodox church in Paris. Also in 1931 he began to publish a Georgian scientific journal titled "Jvari Vazisa" ("Cross of Vine").

At the invitation of Orthodox Metropolitan Dionysius Waledinsky of All Poland in 1932, Grigol taught until 1934 at the Faculty of Orthodox Theology of Warsaw University in Poland as a Professor of Patrology. In 1934, he also received the rank of archimandrite.

Throughout the 1930s, Archim. Grigol continued his search for manuscripts concerning Georgian Christian culture. He discovered many in Romania, Bulgaria, Greece, Italy, Germany, and Austria. These included manuscripts of the Typikon of the Georgian Petritsoni Monastery (Bachkovo, Bulgaria), the so-called Tischendorf manuscripts of the Apagae of the Monastery of the Holy Cross at the University Library in the University of Leipzig, Germany, as well as others.

The invasion of Poland by German troops in 1939 made Archim. Grigol's position in Poland precarious, for his being in solidarity with Jews in peril went without saying. He helped wherever he could. He did not hesitate to visit the imprisoned Polish Metr. Dionysius. These activities were viewed with growing suspicion by the Nazi occupiers and brought Archim. Grigol's fruitful ecclesiastic and scientific activities to an end.

On May 4, 1942, he was arrested by the German Gestapo for sheltering and aiding Jews and other victims of fascist persecutions. The priceless collection of Georgian manuscripts he had collected (in hopes of returning them to Georgia) disappeared a search of his quarters. Initially, incarcerated in Pawiak prison in Warsaw, he was deported to Auschwitz in November 1942.

At Auschwitz, a German officer was killed by one of the inmates. To get a confession, the guards drove everyone out of the barracks completely naked into the below freezing weather. To save the innocent prisoners from freezing to death, Archim Grigol chose to take the blame for the murder. Upon his admission the guards let loose dogs on the [[martyr], then poured gasoline over him, and lit him on fire.

It was on December 6, 1942, at 4:45PM, that Grigol Peradze was martyred in the Nazi concentration camp of Auschwitz. In the end, like Christ Himself, Archimandrite Grigol died for having taken upon himself the sin of another.

Grigol Peradze was glorified by the Georgian Orthodox and Apostolic Church in 1995.