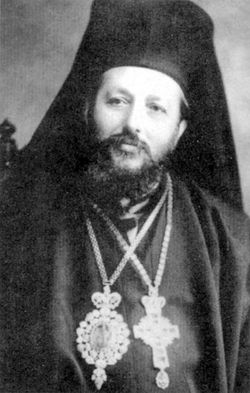 Metropolitan Germanos (Shehadi) of Zahle and Baalbek was a hierarch of the Church of Antioch who attempted to become the successor to Bishop Raphael of Brooklyn as leader of the Syro-Antiochian parishes in North America after the saint's death.

Met Germanos had come to America in 1910s as a visitor, raising funds for an agricultural school in his archdiocese in what is today Lebanon.

Metropolitan Germanos Shehadi of Zahle was a diocesan bishop in the Lebanon area of Syria in the second decade of the twentieth century who, before Bishop Raphael died in 1915, came to the United States of America to raise funds for an agricultural school in his own diocese of Zahle. Zahle is a mostly Christian area in today's Lebanon with primarily an agricultural economy.

After St. Raphael's death, Metr. Germanos remained in America and campaigned to become his successor as the leader of the Syro-Antiochian parishes in America, claiming to be the representative of the Patriarch of Antioch. Those who wanted to be under the jurisdiction of the Church of Antioch formed parishes under Metr. Germanos, and he eventually formed his own rogue diocese in 1916 This group became the basis of the later split in the Syro-Antiochian mission. Metr. Germanos remained in America despite many orders from the Antiochian synod in Damascus calling on him to return to shepherd his own diocese of Zahle.

Much of Germanos' success amongst the Syro-Antiochians was based not only on his fine singing voice and great charisma, but also because he was well known and related to many clergy and parishioners from the Zahle region. As a result, many of the parishes that followed Germanos eventually became part of the Antiochian Archdiocese of Toledo, Ohio under Metr. Samuel David, who also was from Zahle.

In 1919, Metr. Germanos also supported the establishment of the Ukrainian Orthodox Church of Canada by acting as their temporary bishop at the UOCC sobor of November 27, 1919.

Metr. Germanos finally returned to his own diocese in, then, Syria in 1933.