Gerasimos of the Jordan 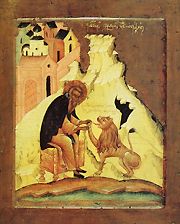 Gerasimos lived in the fifth century and was the abbot of a community of 70 monks who all lived in the desert east of Jericho, near the Jordan River. Their life was strict, they slept on reed mats, had cells without doors and observed silence. Their diet consisted mainly of water, dates and bread. It is said, that Gerasimos in ongoing repentance for having been influenced by the teachings of a heretic in his youth, lived on even less than the norm.

One day while he was walking along the Jordan, Gerasimos came upon a lion roaring in agony because of a large splinter imbedded in one paw. Overcome by compassion for the beast, Gerasimos removed the splinter and cleaned the wound, bounding it up, expecting the lion to return to its cave. Instead the creature meekly followed him back to his monastery and became his devoted pet. The whole community was amazed at the animal's conversion to a peaceful nature, life and devotion to the abbot; living on bread and vegetables.

The lion was given the special task of guarding the communities donkey, which grazed along the Jordan. One day, it happened that, while the lion was napping, the donkey strayed and was stolen by a passing trader. After searching, without success, the lion returned to the monastery, it head hanging low. The brothers concluded that the lion had been overcome and had eaten the donkey and as punishment, gave the lion the job of the donkey; to carry water each from the river to the monastery in a saddle pack with four earthen jars.

Months later, it happened that the trader was passing through the Jordan with the stolen donkey and three camels. The lion recognised the donkey and roared so loudly that the trader ran away. Taking its rope in his jaws, the lion led the donkey back to the monastery with the camels following behind. The monks realised that they had misjudged the lion; this is how the lion earned his name "Jordanes" from the Elder Gerasimos.

For a further five years, the lion "Jordanes" was part of the monastic community. When the elder fell asleep in the Lord and was buried, Jordanes lay down on the grave, roaring in his grief and beating its head against the ground. Finally Jordanes rolled over and died on the last resting place of Gerasimos.

The icon of St. Gerasimos focuses on an event of physical contact between the monk and the lion.

The abbot Gerasimos and this story are real as many texts refer to him and soon after his death he was recognised as a saint. The monastery he founded lasted for centuries and is today a place of spiritual pilgrimage in the desert.

The Holy Lavra of St. Gerasimos is located in the desert of the Jordan in Jericho and was built by the Saint in 460.