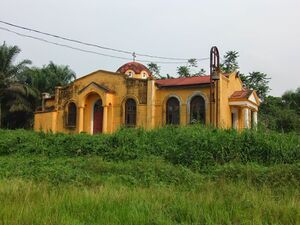 Church of the Annunciation, probably the seat of Kisangani.

The Holy Diocese of Kisangani is a diocese under the Archdiocese of Kinshasa of the Patriarchate of Alexandria.

Kisangani is the fifth-largest city in Kenya. It is the largest and principal city of Northern Congo, being founded by the end of the 19th century by the Belgians. In the 1960s, during the Cold War, its inhabitants were made victims of many clashes and lootings supported by the Capitalist and Socialist Blocs. The First Congo War (1996–1997) which followed the Rwandan Genocide in the 1990s, also supported by the great world powers of that time, desolated the region, leaving hundreds of thousands (up to 800,000 countrywide) dead. Another massacre, this time during the Second Congo War (1998–2003), killed over a hundred Congolese in Kisangani. Peace only returned to the city in 2002.

Congo was received many Greek Egyptians during the 1950s after the Egyptian revolution, when the Egyptian dynasty was overthrew by the republicans. Some Greeks settled in Kisangani (then Stanleyville) and brought Orthodoxy with them. In 1958, the Archdiocese of Central Africa was established by the Holy Synod of Alexandria, having jurisdiction over the present-day countries of Congo (both) and Gabon. It was renamed to Archdiocese of Kinshasa in 2015.

The see of Kisangani was established by a Patriarchal and Synodal Decree of His Beatitude the Patriarch Theodoros II of Alexandria on November 26, 2018, together with the dioceses of Gulu, Malawi, Toliara, Goma and the Archdiocese of Kananga. The seat of Kisangani is still vacant to this day, probably under direct administration of His Eminence the Archbishop of Kinshasa Nikiforos (Mikragiannanitis).