Diocese of Akhalkalaki and Kumurdo

The Diocese of Akhalkalaki and Kumurdo is an ecclesiastical jurisdiction of the Church of Georgia located in the nation of Georgia. 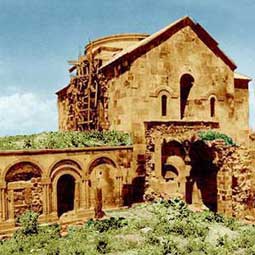 The diocese is situated in South Georgia,in the historical region of Javakheti. According to Sumerian chronicles, Javakheti had established its statehood even in the eighth century B.C.

Javakheti became a strong principality within Kingdom of Kartli (East Georgia). Also, Javakheti is important historically due to the fact that St. Nino, Enlightener of Georgia, entered Georgia through Javakheti, near Paravani lake. Christian parishes were here even before St Nino.

In the 1990s the Diocese of Borjomi and Akhalkalaki was restored. This diocese included territory previously belonging to Kumurdo, and it was the successor of the Diocese of Kumurdo.

By the decision of Holy Synod of Georgia (October 17, 2002), the Diocese of Borjomi and Akhalkalaki was separated into two dioceses: Borjomi-Bakuriani and Akhalkalaki-Kumurdo.