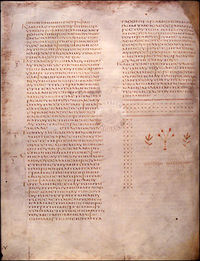 The Codex Alexandrinus (London, British Library, MS Royal 1. D. V-VIII; Gregory-Aland no. A or 02, Soden δ 4) is a fifth century manuscript of the Greek Bible, containing the majority of the Septuagint and the New Testament.[1]

Along with the Codex Sinaiticus and the Codex Vaticanus, it is one of the earliest and most complete manuscripts of the Bible. It derives its name from Alexandria where it resided for a number of years before being given to the British in the seventeenth century.

The text in the codex is written in two columns in uncial script, with between 46 and 52 lines per column and 20 to 25 letters per line. The beginning lines of each book are written in red ink and sections within the book are marked by a larger letter set into the margin. Words are written continuously in a large square uncial hand with no accents and only some breathings (possibly added by a later editor). Some letters have Coptic shapes (f.e. Δ i Π).

The codex contains a complete copy of the LXX, including the deuterocanonical books 3 and 4 Maccabees, Psalm 151 and the 14 Odes. The "Epistle to Marcellinus" attributed to St. Athanasius and Eusebian summary of the Psalms are inserted before the Book of Psalms. It also contains all of the books of the New Testament, in addition to 1 Clement (lacking 57:7-63) and the homily known as 2 Clement (up to 12:5a).

There is an appendix marked in the index, which lists the Psalms of Solomon and probably contained more apocryphal/pseudepigraphical books, but it has been torn off and the pages containing these books have also been lost.

Due to damage and lost folios, various passages are missing or have defects:

There are 773 vellum folios (630 in the Old Testament and 143 in the New Testament). The manuscript measures 12.6 by 10.4 inches and most of the folios were originally gathered into quires of eight leaves each. In modern times it was rebound into quires of six leaves each. The only decorations in the manuscript are decorative tailpieces at the end of each book (see illustration) and it also shows a tendency to increase the size of the first letter of each sentence.

The manuscript's original provenance is unknown. A thirteenth or fourteenth century Arabic note on folio 1 reads: "Bound to the Patriarchal Cell in the Fortress of Alexandria. Whoever removes it thence shall be excommunicated and cut off. Written by Athanasius the humble."[2] A seventeenth century Latin note on a flyleaf (from binding in a royal library) states that the manuscript was given to the patriarchate of Alexandria in 1098 (donum dedit cubicuo Patriarchali anno 814 Mrtyrum), although this may well be "merely an inaccurate attempt at deciphering the Arabic note by Athanasius."[3] The codex was brought to Constantinople in 1621 by Cyril Lucaris (first a patriarch of Alexandria, then later a patriarch of Constantinople) who then presented it to Charles I of England in 1627, through the hands of Thomas Roe, the English ambassador at the court of the Sultan. It became a part of the Royal Library, British Museum and now the British Library. It was saved from the fire at Ashburnam House (the Cotton library) on October 23, 1731, by the librarian, Dr Bentley.

Textual critics have had a challenging task in classifying the Codex, with the exact relationship to other known texts and families still disputed. The gospels are mainly of the Byzantine text-type, but there are a number of Alexandrian features. Alexandrinus follows Alexandrian readings through the rest of the New Testament, however, the text goes from closely resembling Codex Sinaiticus in the Pauline epistles, to more closely resembling the text of a number of papyri ( for the Apocalypse). The gospels are cited as a "consistently cited witness of the third order" in the critical apparatus of the Novum Testamentum Graece, while the rest of the New Testament is of the "first order."