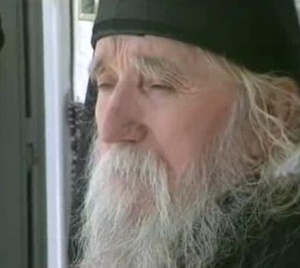 Elder Cleopa
Elder Cleopa (Ilie) (April 10 , 1912 - December 2, 1998) was a very well-known monk and representative of the Romanian Orthodox Church and an archimandrite and abbot of the Sihastria Monastery.

Cleopa Ilie (lay name: Constantin) was born in Suliţa, Botoşani to a family of peasants. He was the fifth of ten children born to Alexandru Ilie. He attended the primary school in his village. Afterwards he was an apprentice for three years to the monk Paisie Olaru, who lived in seclusion at the Cozancea hermitage.

Together with his elder brother, Vasile, Ilie joined the community at Sihastria hermitage in December 1929. In 1935, he joined the army in the town of Botoşani, but returned a year later to the hermitage, where he was anointed a monk on August 2, 1937, taking the name "Cleopa" (i.e. "guide") at his baptism. In June 1942, he was appointed to hegumen deputy because of abbot Ioanichie Moroi's poor health.

On December 27, 1944, he was ordained a hierodeacon (deacon-monk) and on January 23, 1945 a hieromonk (priest-monk) by the archbishop Galaction Cordun, abbot of the Neamţ Monastery at the time. Afterwards he was officially appointed hegumen of the Sihastria Hermitage. 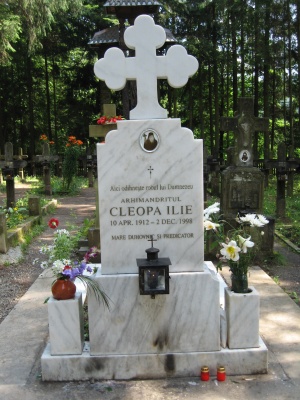 In 1947, the hermitage became a monastery and vice-archimandrite Cleopa Ilie became archimandrite on approval of Patriarch Nicodim. Because the Communist secret service was looking for him in 1948, he disappeared into the woods surrounding the monastery, staying there for six months. On August 30, 1949, he was appointed abbot of the Slatina Monastery in Suceava county, where he joined 30 other monks from the Sihastria Monastery community as a result of Patriarch Justinian’s decision.

There he founded a community of monks with over 80 people. Between 1952 and 1954 he was being chased again by the Securitate and, together with hieromonk Arsenie Papacioc, escaped to the Stanisoara Mountains. He was brought back to the monastery after two years upon Patriarch Justinian’s order.

In 1956 he returned to Sihastria monastery, where he had been anointed, and in the spring of 1959 he retired for the third time to the Neamţ Mountains, spending the next five years there. He returned to Sihastria in the fall of 1964, as confessor for the entire community and continued to give spiritual advice to both monks and lay people for the next 34 years. He died on December 2, 1998 at Sihăstria Monastery.