Church of the Virgin of Blachernae (Istanbul)

The Church of Panagia Blachernae (full name in Greek: Θεοτòκος τών Βλαχερνών (pr. Theotókos tón Blachernón); Turkish name: Meryem Ana Kilisesi) is located in Istanbul, in the district of Fatih, in the neighbourhood of Ayvansaray, along Mustafa Paşa Bostanı Sokak. It lies a few hundred meters inside the walled city, at a short distance from the shore of the Golden Horn. The building is protected by a high wall, and preceded by a garden.

The church is near the northern tip of the walls of Theodosius built by the Empress Pulcheria (ca. 450-453), and her husband, Emperor Marcian (450-457). They had the church built on the site of a sacred spring, which was a place of pilgrimage near the shore of the Golden Horn (known as Ayvansaray today). Inside is now the best known and most celebrated sanctuary to the Virgin Mary in Constantinople. Emperor Leo I (457-474) completed the church by adding the "Hagiasma" [1]. [2]He also built the "Hagion Lousma" [3]. 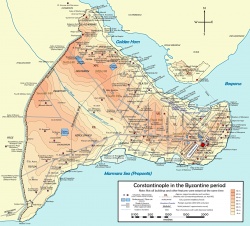 Blachernae: at the northern point of Constantinople

Emperor Leo I also built the circular pareklision Hagia Soros (chapel), next to the church to contain the holy robe and girdle of the Virgin Mary, brought from Palestine in 458 (or 473). The chapel of the Virgin's robe was covered in silver and considered a "reliquary of architectural dimensions." Lay people were not allowed inside but could pray in the main church.[4] This very shrine housed the miracle-working icon of the Blachernitissa.

In 625-626, Constantinople was attacked by the Avards. Emperor Heraclius (575-641) campaigned against the Persians, however, the icon was carried in a procession along the city walls and so the saving of the city was attributed to the intervention of the Theotokos. In order to protect the sanctuary, and the city from such a siege, Leo I added the famous quarter of Blachernae in 627, with its venerated church, whose image was now considered the palladium of Constantinople. The circumference of the walls were then, and still are, eleven to twelve miles. By this stage, the church of Blachernae had around 75 endowed clerics.

During the iconoclastic period, and according to tradition, the icon disappeared and was then found hidden behind a wall during renovation works in 1030.

The church was burnt down in 1070 and rebuilt by the year 1077 either by Romanos IV Diogenes (1067-78) or Michael VII (1071-87) and then destroyed again by fire in 1434. The church, at this stage, was connected to the Palace of Blachernae by a stairway. After the fire, nothing remained of the fire apart from the Sacred Spring.

In 1867, the modern church was built and further additions have since been made to the structure. It is said, that the Akathistos was first chanted at this location and a special marble plaque, inscribed with the Akathistos verse, a celebrated Byzantine hymn, to the Theotokos, has now been placed above the Hagiasma. In addition, there are four wall paintings by the famous painter Eirenarchos Covas (1964)

To this very day, the spring is reputed to have therapeutic powers. Also associated with the history of this shrine is: