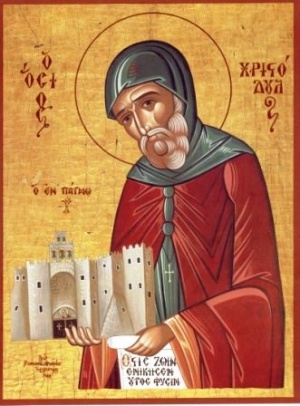 Our father among the saints Christodoulos Latrinos of Patmos and Wonderworker. He is remembered for the establishment of the Monastery of St. John the Theologian on Patmos and the re-settlement of the island after the Saracens had de-populated it. He is commemorated on March 16.[1]

John, the son of peasants Theodore and Anna, was born in Nicea of Bithynia in Asia Minor in the eleventh century. John was a self-taught man who developed a love for books. As a young man, he followed an ascetic life, living as a hermit on Mount Olympus of Asia Minor as well as in the Palestinian desert before he assumed the monastic habit and received the name Christodoulos ("slave of Christ" in Greek). He then served as abbot of the Monastery of Mount Lamos in Caris in western Asia Minor. After the incursion of the Saracens in 1085, abbot Christodoulos and the monks of the monastery fled to the island of Kos in the southeastern Aegean Sea.

On Kos, Abbot Christodoulos established a monastery dedicated to the Mother of God. Also on Kos, Christodoulos met an ascetic, Arsenius Skinouris, the son and heir of a wealthy landowner of Kos, who became the abbot's spiritual son. Together, they dreamt of reestablishing monastic life on the nearby island of Patmos that had been de-populated following attacks by Saracens forces. During the following several years, Abbot Christodoulos also established a monastery on the island of Leros, dedicated to St. John the Theologian.

When he returned from Constantinople, he brought masons and other craftsmen and began the construction, in 1091, of the monastery dedicated to St. John the Theologian. The new monastery was built over the ruins of the Basilica of St. John of the fourth century and of an earlier temple to the pagan goddess Diana and included a defensive structure that he called the "the Fortress". The structure of his monastery remains in use to today.

In 1093, however, raids on the island by Emir Dzaha forced Fr. Christodoulos and the monks to flee to the island of Euboia where Fr. Christodoulos died on March 16, 1093. The monks did return to Patmos a few years later, having regained the monastery, and brought with them his incorrupt relics.