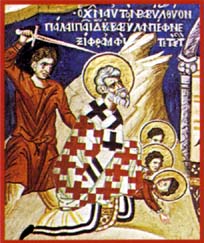 The Hieromartyr Babylas was the Bishop of Antioch from 237 to 253. His feast day is September 4. He was martyred for his faith in Christ together with the three youths Urban, Prilidian, Epolonius and their mother Christodoula, under the emperor Decius (249-251).

Little is known of the life of Babylas. He was named Bishop of Antioch in 237 as successor to Bishop Zebinus. Babylas is noted for his defense of Christianity before the Roman emperor Decius that led to his martyrdom. Various sources place the events differently. [1] [2] [3] [4]

The most common version notes that during a visit to Antioch by the emperor Decius as part of an arranged a festival to the pagan gods, Decius attempted to witness a Divine Liturgy served by Babylas. Babylas barred the emperor from entering the church, for which the emperor had the church burned. After Babylas declared the emperor unworthy because he desecrated God's sanctuary, Decius ordered Babylas to worship the pagan idols or face execution.

At the trial with Bishop Babylas were three young brothers, who did not forsake him even in this most difficult moment. Seeing them, the emperor asked, “Who are these children?" “These are my spiritual children,” the saint replied, “and I have raised them in piety, I have given them an education, cultivated them with guidance, and here before you in a small body are these great young men and perfect Christians. Test them and see.”

The emperor tried in all sorts of ways to entice the youths and their mother Christodoula to renounce Christ, but in vain. Then, in a rage, he ordered each of them to be whipped with a number of blows corresponding to their age. The first received twelve blows, the second, ten, and the third, seven. Dismissing the mother and children, the torturer again summoned the bishop, telling him that the children had renounced Christ. However, the holy bishop did not believe the lie.

The emperor commanded all the martyrs be tied to a tree and burned with fire. Seeing the stoic bravery of the saints, the emperor finally condemned them to be beheaded with the sword in the year 253.