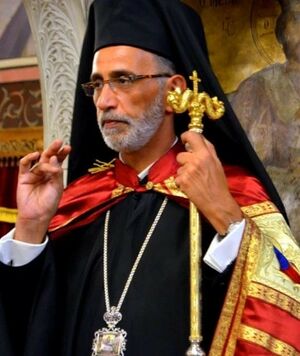 His Eminence Alexandros of Nigeria

His Eminence, the Most Reverend Alexandros (Gianniris) of Nigeria is the Archbishop of Nigeria and Exarch of the Gulf of Guinea (Nigeria, Niger, Benin, Togo), part of the Church of Alexandria.

George Gianniris was born in Athens on May 15, 1960. From 1978 to 1983, he graduated from the School of Agronomy of the University of Athens. George attended the liturgies of the Church of Greece with minor orders.

On October 1, 1988, George was ordained deacon by His Beatitude Seraphim of Athens (1975–1998) with the name of Alexandros. On the following day, he was ordained to the Holy Priesthood with the dignity of Archimandrite. In 1990 Father Alexandros was transferred to the Metropolis of Thessaloniki in order to start his studies at the School of Theology of the University of Thessaloniki, from which he graduated in 1994.

Between the tenures of Patriarch Pathenios III (1987–1996) and Patriarch Petros VII of Alexandria (1997–2004), Archimandrite Alexandros was transferred to the Patriarchate of Alexandria, serving as the superior at the Patriarchal Church of the Holy Unmercenaries in the Archdiocese of Johannesburg in South Africa under Archbishop Paul (Lyngris) (1968–1998) as well as secretary of the Archdiocese. He was appointed Director of the Private Patriarchal Office in April 1997.

On September 23, 1997, Archimandrite Alexandros was elected Bishop of the newly-formed Diocese of Nigeria under the Archdiocese of Cameroon and its hierarch, His Beatitude Theodoros (Choreftakis) (1997–2002), now Patriarch of Alexandria. His consecration took place on November 24, 1997. His Grace and his see were elevated to the rank of Archbishop and Archdiocese on October 27, 2004 by decision of the Holy Synod and Patriarch Theodoros, who was enthroned on the same month.

Being a member of the Holy Synod, His Eminence attended the Council of Crete in 2016. At the time, Archbishop Alexandros condemned the political pressure that was being put in the Church by Ukrainian politicians regarding the creation of the alternative synod that would take place two years later.