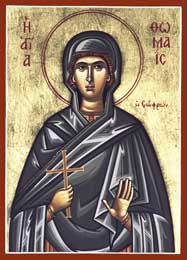 The holy and glorious Martyr Thomais of Alexandria was killed by her father-in-law for refusing to give way to earthly passions with him. She is called upon today in order to be set free from lusts and other impurities. Her feast day is celebrated on April 13 or 14.

Saint Thomais had a pious upbringing in the city of Alexandria. At the age of fifteen, she married a Christian fisherman and lived with him in the house of his family.

One night, when St. Thomais' husband went out fishing, the saint's father-in-law was engulfed by her beauty and tried to lead her into temptation. After trying to fend him off with teachings from the Bible, the man threatened to cut off her head if she refused to enter with him into sin. Refusing to stray away from the Lord's teachings, she accepted the crown of martyrdom after the old man cut off her head with a sword in the year 476.

After committing his sin, the man was blinded and was unable to escape from the house. He was later found near the saint's body covered in blood and taken to a judge, where he was beheaded for his crime.

St. Daniel of Skete was in the city of Alexandria at the time of her death. He instructed the monks of the Oktodekadian monastery to bury the saint's body in the monastery's cemetery. After some of the monks questioned the decision to bury her with the monks, St. Daniel responded, "She is a mother to me and to you, because she died for her chastity."

When one of the monks at the monastery became tempted with lust, he prayed before St. Thomais' grave and was relieved of his torments. Many others also received the great joy of being eased of their earthly passions by the fallen saint. Still today, she is prayed to for deliverance from sexual impurity.

"Even if you cut me to pieces, I shall not stray from the commandments of the Lord."