Sunday of the Publican and Pharisee 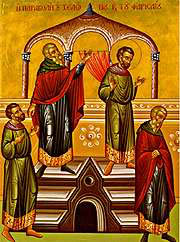 Parable of the Publican & Pharisee

The Sunday of the Publican and Pharisee begins the Lenten Triodion, the liturgical book used in the services of Great Lent. It is the Sunday after the Sunday of Zacchaeus and Sunday before Sunday of the Prodigal Son. This is the pre-Lenten start of the Easter cycle of worship in the Orthodox Church.

The focus this Sunday is on the Gospel of Luke 18:10-14, in which two men went to the Temple to pray. One was a Pharisee, an externally decent and righteous man of religion, and the other was a publican, a sinful tax-collector who was cheating the people.

Though the Pharisee was genuinely righteous under the Law, he boasted before God and was condemned. The publican, although he was truly sinful, begged for mercy, received it, and was justified by God.

On this Sunday in the preparation for Great Lent, Orthodox Christians are to see that they have not the religious piety of the Pharisee, but the repentance of the publican. They are called to think about themselves, in the light of Christ's teaching, as they really are and to beg for mercy. For everyone who exalts himself will be humbled, and everyone who humbles himself will be exalted. (Luke 18:14)

Let us flee from the pride of the Pharisee!
And learn humility from the Publican's tears!
Let us cry to our Savior,
Have mercy on us,
Only merciful One!