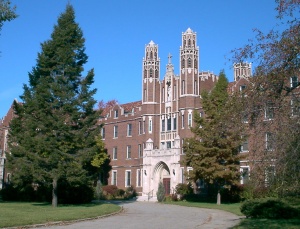 St. Andrew House Center for Orthodox Christian Studies is a Pan-Orthodox institution dedicated to Orthodox unity. It offers Orthodox Christians in the Detroit area "a place where they can gather to learn about their faith, share information with other parishes and to further witness the Gospel of Jesus Christ." St. Andrew House is located on Detroit's west side. Archbishop Nathaniel of the Romanian Orthodox Episcopate (OCA) is the founder and president. He has said: "We are united by our faith, and we should be united in our efforts to live that faith...This Center is the first in the United States to serve all the canonical jurisdictions of the Orthodox Church."

The Center is governed by a cross jurisdictional board of directors who come from various parishes across the city. The Council of Christian Orthodox Churches, a 40 year old Inter-Orthodox clergy and lay group, has been a source of constant support for the Center and contributed some of the initial capital to purchase the building. The COCC is one of a number of groups who maintain offices in the building. Other groups include Orthodox Christian Women of Metropolitan Detroit (OCW), Orthodox Christian Laity (OCL), and Psalm Music Ministry. The Center is also home to St. Raphael of Brooklyn (OCA) mission parish, and the Monastery of the Holy Ascension.

The mission of the Center is to support local parishes through education and outreach efforts while fostering unity among the faithful. St. Andrew House is an independent Michigan nonprofit institution. In addition to His Eminence Archbishop Nathaniel, board members include: Warren David and George Metry (Antiochian Orthodox), Steve Lionas (Greek Orthodox), and Dean Calvert and Myke Jacobs (OCA). The board also includes the current president of the Council of Christian Orthodox Churches (COCC) of Detroit.

St. Andrew House formerly was home to the Passionist Fathers of St. Paul of Cross, who lived in the facility for more than 60 years. Now the building serves Metropolitan Detroit's Orthodox faithful as a retreat and conference center.

St. Andrew House's calling is to serve the whole Church, and it has in its membership faithful and clergy of almost every jurisdiction in Metropolitan Detroit. St. Andrew House is designed to support area parishes and to serve as a place where these local communities can come together in unity and faith.

Many parishes have already made use of the Center's facilities to host youth retreats, liturgical music seminars and meetings.

The Center will have an educational focus. Speakers' series and seminars are planned for the future. The Center also has a 7,500 square-foot chapel, which is offered as a resource for area parishes.