The Spaso-Prilutsky Monastery (Russian: Спасо-Прилуцкий монастырь), also Saviour Priluki Monastery, is a monastery within the jurisdiction of the Church of Russia located on the bank of the Vologda River outside the city of Vologda, Russia. Founded by St. Dimitri of Priluki in the fourteenth century, it is the oldest and largest monastery in northern Russia. 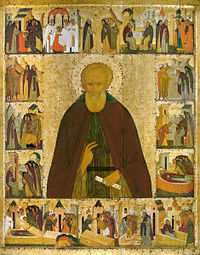 Spaso-Prilutsky Monastery was founded in 1371 by St. Dimitri who was the hegumen of the monastery of St. Nicholas in Pereslavl-Zalessky. Dimitri, who was a disciple of St. Sergius of Radonezh, moved, with his disciple Pachomius, to this remote area looking for a more isolated place for a life of prayer. The two monks settled on the present location for their monastery after their first attempt on the Obnora River was abandoned when the local population objected to a monastery that they thought would acquire their lands.

After the first wooden cathedral and monastic cells were completed, the monastery grew rapidly as it proved to be in a significant location during the expansion of the Moscow state into the northern area. Considered by Prince Dmitri Donskoy, the prince of Moscow, an influencial point in the expansion to the north, the princes, and later tsars, were among the principal benefactors of the monastery.

Hegumen Dmitri reposed in 1392 and was buried near the southern wall of the wooden Cathedral of the Saviour. His relics soon became a shrine for many pilgrims. In the late fifteenth century the Russian iconographer Dionisius rendered an icon of St. Dimitri that was later "commandeered" by Grand Prince Ivan III before his Kazan campaign, having already become esteemed as an miracle-working icon. After his victory at Kazan Ivan returned the icon to the monastery on June 3, 1503, adorned with silver and gold.

The monastery became the visiting place for the Russian grand princes and tsars during the sixteenth century. The Grand Prince Basil II came to Spaso-Prilutsky in 1528 with his wife Elena Glisnkaya to pray for a child. Tsar Ivan IV visited the monastery in 1545 to worship, and then in 1552 to take the Kilikievsky cross as he prepared for his campaign against Kazan.

As was the case for most early Russian church structures, the monastery's original structures were built of wood. But, the Spaso-Prilutsky Monastery was among the first to build stone structures. A stone cathedral dedicated to the All-Merciful Saviour and the feast of the Life-giving Cross was built between 1537 and 1542, replacing the older wooden building. Through the sixteenth century and into the seventeenth, the monastery saw the construction of more stone structures, including a refectory chamber with the Church of the Presentation of the Blessed Virgin and the main (northern) Resurrection gate of the monastery with its church dedicated to Great Martyr Theodore Stratilate.

During the Time of Troubles in the early seventeenth century, the monastery underwent numerous attacks and pillages that resulted in the destruction of considerable part of the old archives. Despite the devastation and fires the monastery recovered quickly and during the second half of the century, a thick stone wall with towers were built around the monastery within which were added a tall new belfry and service buildings.

During the nineteenth century, the Spaso-Prilutsky Monastery was regarded as the stronghold of Orthodoxy in the North as before Napoleon's invasion in 1812, much of the relics and treasures of cathedrals and monasteries of Moscow were brought to the monastery for safekeeping.

After the assumption of political power in Russia by the Bolsheviks in 1917, the monastery was closed in August 1924. The buildings of the monastery were used for a variety of purposes, including living quarters, a prison, a depot, and a museum. Yet, with such uses the monastery's buildings were preserved. In 1991, after the Soviet Union collapsed, the monastery was returned to the Church of Russia and was re-activated.

Spaso-Prilutsky Monastery, like many monasteries in Russia, is built like a fortress. Approximately a rectangle in shape, it is completely surrounded by a masonry wall with four corner towers and three gates. Construction of the wall began after the Polish armies plundered the monastery during the Time of Troubles in the early seventeenth century. Its construction was completed in 1656. The main gate into the monastery, with its Resurrection gate Church, is in the northern wall. A gate leading to the Vologda River is in the western gate while the third gate in the southern wall is closed.

The Saviour Transfiguration Cathedral, located in the center of the monastery, was built between 1537 and 1542 and was the first stone building in Volodga. The cathedral burned down in 1811 and was restored between 1813 and 1817. The bell-tower was built between 1639 and 1654. The Presentation Church was built before 1623, while the Church of All Saints was built in 1721. Construction of the Church of St. Catherine began in 1830.

Among the earliest surviving wooden churches in Russia is the wooden Assumption (Dormition) Church. The church was formerly located in the Alexandro-Kushtsky Monastery close to the selo (rural village) of Ustye and was moved to the Spaso-Prilutsky Monastery in 1962.