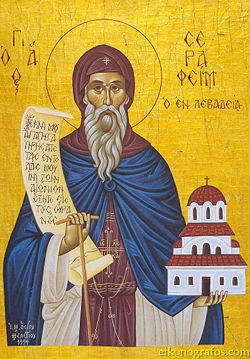 Saint Seraphim of Livadeia [1] or Seraphim the Struggler of Mount Domvu (b.1520- May 6,1602), was an ascetic from the area of Mount Dombos of Livadeia[2] in Greece who is commemorated by the church May 6.

His parents were respectable and pious christians who raised Seraphim accordingly. From a young age, he had a calling to the monastic life. One tradition notes that his mother noted that he would not breastfeed on Wednesdays and on Fridays.

As a child, he was educated in holy writing by the village teacher and this inspired a burning desire for him to pursue monasticism. He left the world early to pursue his ascetical vocation living in a cave at the Prophet Elias on Mount Karkara. There he built a chapel dedicated to the Saviour and spent his time in ascetism. However, he had frequent visitations from family and friends so he left this beloved cave and fled to the monastery of the Holy Unmercenaries Anargyroi.

He did not spend much time at this monastery for the same reasons and left for the Monastery of the Transfiguration of the Savior, located between Thebes and Evia. At this monastery, his ascetical works made him shone as a spiritual star and the abbot of this monastery quickly made him a monk and this is where he was given the name "Seraphim".

With the permission of the abbot, he left this monastery in order to avoid the reputation he was developing for his virtues and moved further west to a place called Domous. There he built another temple dedicated to the name of the Saviour, and some cells, and a community of monks quickly formed.

Seraphim stayed at this location for 10 years, working on virtuous projects, teaching students lessons in salvation and the Gospel. He spent the rest of his life as a hermit; foretelling his own death. He was 75 years old when he peacefully reposed in the Lord May 6, 1602 halfway through Pentecost in the sixth hour.

It is said that he performed many miracles during his life.

There is a monastery in Greece dedicated to this saint.