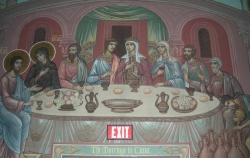 Pimen Sofronov was born to Old Believer parents in a small village near Lake Peipus in the Estonian region of the Russian Empire. His year of birth is uncertain, being either 1898 or 1899. He began his apprenticeship at the age of twelve under the tutelage of the master iconographer Gavril Efimovich Frolov and continued his association with Frolov for twenty years.

With the fall of the imperial government in Russia in 1917, Pimen moved to the Balkans where he continued his painting. In Yugoslavia, he was commissioned to renovate and restore many old paintings in Serbian Orthodox churches as well as painting frescoes in new churches. He remained in Yugoslavia until he was asked to come to western Europe to paint for the Orthodox communities there. In Paris, France he taught at the Icon Society, a school for icon painters. Sofronov's efforts training a generation of iconographers led to his recognition as the most influential iconographer of the Russian emigration.

In the 1930s, he was commissioned to paint icons and murals for a Byzantine chapel in the Vatican. Thus, for some seven years he worked in and around the Vatican. As few trained iconographers were available in the United States during the years following World War II, Sofronov was encouraged strongly to emigrate to the United States of America. 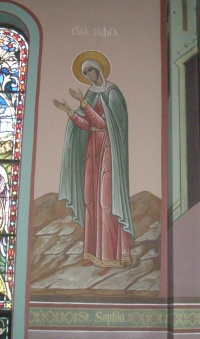 In the United States, his first major commission was to paint the iconography at Ss. Peter and Paul Church in Syracuse, New York. Then in 1954, he was invited to paint the icons in St. Vladimir's Church in Trenton, New Jersey, a commission that took him two years, often working day and night. The commission included the iconostasis and all the walls and ceilings of the church. Eventually, most of the church was covered with iconography that created a heavenly atmosphere.

Pimen Sofronov went on to complete the iconography at two other parishes in the northeastern United States: Three Saints Church, Ansonia, Connecticut and Holy Trinity Church, in Brooklyn, New York. In addition, he had trained students in the Philadelphia area.

Pimen Sofronov reposed in 1973 and was buried in southern New Jersey.