From OrthodoxWiki
Jump to: navigation, search
This article or section is incomplete. It is more than a stub, but does not yet include a sufficient summary of the subject matter. You can help OrthodoxWiki by expanding it.

The Copts are the descendents of the ancient Egyptians, and they constitute between 10-15% of the Egyptian population. It is an official policy of the authorities in Egypt not to announce the number and percentage of the Copts after the army officers' coup of 1952. 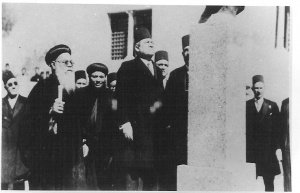 Patriarch Yousab II at the opening of the New Wing of the Coptic Museum in 1947. Pahor Labib stands to the right of the bust of Morcos Semaika

Pahor's father, Cladius Labib, was the Coptic language teacher of Patriarch Youab II when the latter was studying in the Theology School. Pahor used to visit the Patriarch and both used to engage in a conversation in Coptic. Cladius Labib was moved from his resting place to a new burial site for the Coptic Orthodox and the Patriarch paid for the construction of the new family tomb. 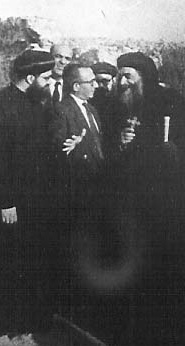 St Mina is a Coptic saint who was martyred in the fourth century. A great Cathedral was erected at his burial site in Maryout in the western desert of Egypt west from Alexandria. Many faithful from all round the Mediterranian used to visit the site and a flourishing community was in that area for centuries till the Arab invasion of Egypt when the Arabs destroyed the church. A German archeologist, Kuffman, carried out excavations at the site at the beginning of the 20th century, starting in 1905. Pahor resumed these excavations in 1951. The site then was in the middle of the desert and was difficult to reach. Pope Cyril VI founded a monastery near the site and this monastery is one of the main surviving monasteries in Egypt. There are now roads up to the monastery and the area has many cultivated fields.

A great Cathedral named after St Mary was constructed in Tel Atrib near the city of Benha in the Delta, Lower Egypt. There are many records of the magnificence of this Cathedral such as that the capitals of the marble pillars were covered with gold. This Cathedral was destroyed by the Arabs during their invasion of Egypt. Pope Cyril VI and also Pope Shenouda III were keen for the area to be excavated. Excavations went on for years with the help of a Polish excavation group from the University of Warsaw. Locals encouraged by officials took over the area and covered the site that is used now for agriculture.

Dr Labib used to teach at the Archeology institute and Pope Shenouda, before being ordained, attended Pahor’s lectures for one year. Pope Shenouda appointed Pahor to the committee that was investigating the relics of St John the Baptist in St Makarious Monastery in Nitria.

A government committee for promoting Christian pilgrimage was established during Naser’s time. This committee was chaired by Bishop Samuel and Dr Pahor Labib was a member. During this period stamps showing Chrisitan sites such as St Mary’s Tree at Mattaryya where it is reputed that the holy Family rested during their travels in Egypt‎. Other stamps of Christian sites and Coptic exhibits were issued.