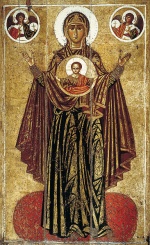 Orans (Latin, praying), (or Oranta) is a representation of a person in a bodily attitude of prayer, usually standing, with elbows close to the sides of the body and with the hands outstretched to the side and upward, usually represented as a female figure with extended arms.

The custom of praying with outstretched, raised hands is ancient, common to both Jews and Gentiles. That the orans position of upward stretched arms with the palms of the hands facing upward was commonly used by Christians is evident in its early appearance in the wall paintings in the catacombs of Rome and is still used in communal and private prayer by both clergy and laity.

Our Lady of the Sign - Apse of St. Nicholas Cathedral, Washington, DC

This position of prayer is represented most frequently in Orthodox Christian iconography in the icon of Our Lady of the Sign. This depiction of the Virgin Mary as Wider than the Heavens, known as the Platyteria, is an orans type presentation that is often seen placed in the apse of Greek and Slavic styled churches, behind the altar and over looking the nave of the churches.