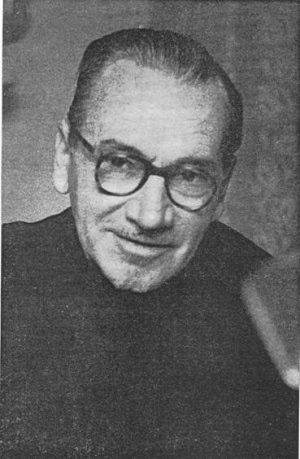 Nikolay Nikolayevich Afanasiev (Николай Николаевич Афанасьев), was a prominent Russian priest and theologian of the post 1917 emigration from Russia at St. Sergius Institute in Paris, France.

Afanasiev was born in Odessa on September 4, 1893, the son of Nikolay Grigoryevich Afanasiev, a lawyer, and Proskovya Yakovlevna. After studying mathematics at university, he served in the White Army artillery during the civil war following the Russian Revolution. He married his wife, Marianne, in Prague in 1925.

Afanasiev pursued graduate studies at the University of Belgrade, studying under Alexander Dobroklonsky, the noted historian of the Russian Church. He received his doctorate in 1927 after defending his dissertation, Authority of the State and Oecumenical Cathedrals. He taught at the Orthodox seminary in Skopije from 1925-1930, and then began teaching church history and canon law at the St Sergius Institute in 1930.

Afanasiev was ordained a priest on January 6, 1940 by Metropolitan Eulogius; he was accompanied around the altar by Sergius Bulgakov and Cyprian Kern. He took up pastoral work in Tunisia from 1941-1947, then returning to St Sergius in 1947. He died December 4, 1966.

Afanasiev is best remembered for his recovery of eucharistic theology, which influenced Orthodox and non-Orthodox theologians alike ever since.

Active in ecumenical discussions, Afanasiev was an official ecumenical observer at Vatican II. His best-known work is his essay on the primacy of Rome in the ancient Church, entitled “The Church Which Presides in Love.”