From OrthodoxWiki
Jump to: navigation, search
This article or section needs a cleanup to bring it to a higher standard of quality. Recommendation:
standardization
More detailed comments may be noted on the talk page. You can help OrthodoxWiki by editing it, especially to conform to the Style Manual and the suggestions in How to write a great article. 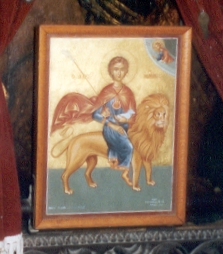 St Mamas, the lamb and the lion: icon in the church at Morphou
Saint Mamas of Caesarea (sometimes: Mammas, Mammes, or Mammet) was martyred c. 275 at the age of 15 in Cappadocia. He preached Christianity during his teenage years, and a lion from the fields is said to have remained with him as companion. In iconography, his attribute is the lion. He is commemorated by the Church, with his parents martyrs Theodotus and Rufinaon, on September 2. (His feast day is August 17 in the Roman Catholic calendar.)

In Cyprus Saint Mamas is popularly known as a poor hermit who lived in a cave near the Cypriot town of Morphou (Guzelyurt). When the local authorities tried to tax him, he evaded them. Soldiers were sent out and captured him, but on the way back to town he saw a lion attacking a lamb. He then escaped the soldiers, saved the lamb, jumped on the lion's back, and in that way came to town. His bravery earned him an exemption from the tax.

Your holy martyr Mamas, O Lord,
Through his suffering has received an incorruptible crown from You, our God.
For having Your strength, he laid low low his adversaries,
And shattered the powerless boldness of demons.
Through his intercessions, save our souls!

Holy Mamas,
Lead your people your as a flock to life-giving pastures
With the staff God has given you;
Crush the invisible and fierce enemies beneath the feet of those who honor you.
For all of those who are in danger have received you as their fervent intercessor.