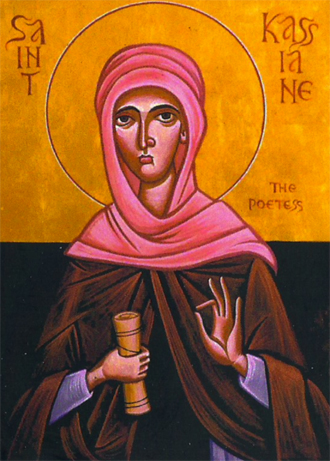 Saint Kassiani [1] was a Byzantine abbess, poet, composer, and hymnographer. She is commemorated by the church on September 7. She is especially known as the composer of the Hymn of Kassiani.

Kassiani is one of the first composers whose scores are both extant and able to be interpreted by modern scholars and musicians. Approximately fifty of her hymns are extant and twenty-three are included in the Orthodox Church liturgical books. The exact number is difficult to assess, as many hymns are ascribed to different authors in different manuscripts and are often identified as anonymous. In addition, some 789 of her non-liturgical verses survive. Many are epigrams or aphorisms called "gnomic verse". An example:

I hate the rich man moaning as if he were poor.

She was born between 805 and 810 in Constantinople into an wealthy family [2] and grew to be exceptionally beautiful and intelligent. Three Byzantine chroniclers, Symeon Metaphrastes, George the Monk (a.k.a. George the Sinner) and Leo the Grammarian, claim that she was a participant in the "bride show" [3] organized for the young bachelor Theophilos the Iconoclast by his stepmother, the Empress Dowager Euphrosyne. Smitten by Kassia's beauty, the young emperor approached her and said: "Through a woman [came forth] the baser [things]", referring to the sin and suffering coming as a result of Eve's transgression. Kassia promptly responded by saying: "And through a woman [came forth] the better [things]", referring to the hope of salvation resulting from the Incarnation of Christ through the Theotokos. According to tradition, the dialogue was:

His pride wounded by Kassia's terse rebuttal, Theophilos rejected her and chose Theodora as his wife.

The next we hear of Kassiani is that in 843 she founded a monastery in the west of Constantinople, near the Constantinian Walls, and became its first abbess. [4] Although many scholars attribute this to bitterness at having failed to marry Theophilos and becoming Empress, a letter from Theodore the Studite indicates that she had other motivations for wanting a monastic life. She had a close relationship with the nearby monastery of Stoudios, which was to play a central role in re-editing the Byzantine liturgical books in the 9th and 10th centuries, thus ensuring the survival of her work (Kurt Sherry, p. 56).

She wrote many hymns for liturgies; the most famous being the eponymous Hymn of Kassiani, sung every Holy Wednesday (liturgically; actually chanted late in the evening of Holy Tuesday).