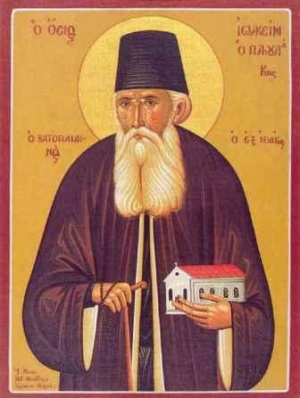 Joachim "Papoulakis" of Ithaca was born in 1786 as Ioannis Patrikios to the devout parents, Angelos and Agne Patrikios, in the little village of Kalyvia of Ithaca in Greece. At a very early age, his mother passed away and his father remarried. His stepmother would be moved in jealousy towards the young child and it was well known that she mistreated him. This forced him at an early age to learn patience and he learnt to spend many hours hiding from her; reading the Holy Scriptures and praying at a small church near his home dedicated to St. Spyridon.

He joined the family business and worked for his father as a sailor. One one of his trips, he visited Mount Athos, where he became a monk and stayed at the Monastery of Vatopaedi taking on the name of "Joachim".

In 1827, the saint returned to Ithaca and served the church there for the remainder of his life. He peacefully fell asleep in the Lord in Vathy of Ithaca on March 2, 1868.

Note, the information used in this article is a loose translation and summary of key components of this Saints life, from the Greek book written by Κωνσταντίνος Π. Κανέλλος, "Ο Όσιος Ιωακείμ ο Ιθακήσιος (1786-1868)"

Other Saints also known as Papoulakis