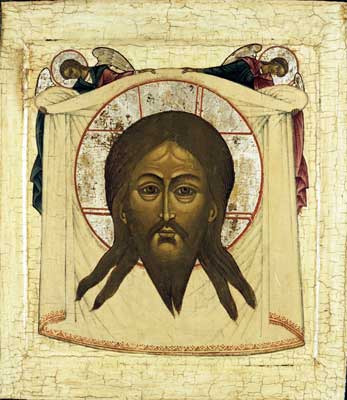 Image Not made by hands

The Icon of the Savior, Image Not-Made-By-Hands, also Acheiropoieta (Byzantine Greek: αχειροποίητα, "made without hand") is one of the earliest icons witnessed to by the Church. The Feast of this icon is celebrated on August 16, during the afterfeast period of the feast of the Dormition, and is called the Third Feast-of-the-Savior in August.

During the time of the earthly ministry of the Savior, Abgar, ruler in the Syrian city of Edessa, was afflicted with leprosy. Reports of the great miracles performed by the Lord extended throughout Syria (Matt. 4:24) and as far as Arabia at this time. Although not having seen the Lord, Abgar believed in him and wrote a letter requesting Christ to come and heal him. Abgar sent his court painter, Ananias, with this letter to Palestine telling him to paint an image of the Divine Teacher. Ananias was not able go to near Christ because of the great many people listening to his preaching. He attempted to produce an image of the Lord Jesus Christ from afar, but could not. The Lord called Ananias and promised to send his disciple in order to heal Abgar from the leprosy and instruct him in salvation. Then the Lord called for water and a towel. He wiped His face with the towel, and on it was His Divine Image.

The Savior sent the towel and a letter to Edessa back with Ananias. With thanksgiving Abgar received the sacred objects and started healing. He continued healing until the arrival of the disciple Thaddeus, Apostle of the 70. The Apostle preached the Gospel and baptized the Abgar and all living in Edessa.

Having written on the Image Not-Made-By-Hands the words, Christ-God, everyone trusting in Thee will not be put to shame, Abgar adorned it and placing it over gates of the city. For many years it was venerated by those who passed through the gates. Edessa, a great-grandson of Abgar, fell into idolatry and was determined to remove the image. In a vision, the Lord ordered the Bishop of Edessa to conceal the image. The bishop and his clergy at night, blocked up the niche with clay tablets and bricks inclosing with it a lit lampada. Many years passed by and the inhabitants forgot about the Holy Object.

In the year 545, the Persian King Chroses I, besieged Edessa, and all seemed hopeless. But Bishop Evlavios was commanded by a vision of the Theotokos to get from the enclosed niche the image with which to save the city from the adversaries. Dismantling the niche, the Bishop found the Holy Image; before it burned the lampada and on the clay tablets, with which the niche had been enclosed, was a similar image. After preceding with the Cross and the Image Not-Made-By-Hands around the walls of the city, the Persian army miraculously departed. In 630, Edessa was seized by Arabs; but they did not hinder veneration of the Image Not-Made-By-Hands. In 944 the Emperor Constantine Porphyrogenitus (912-59) requested that the Image be brought to the Capital of the Orthodox. With great honor the Image of the Savior Not-Made-By-Hands was brought by the clergy to Constantinople. On August 16 the Image of the Savior was placed in the Pharos Church of the Most-Holy Theotokos.

There are several traditions concerning the fate of the Image Not-Made-By-Hands. One is that it was carried away by Crusaders during the time of their dominion over Constantinople (1204-61), but the ship on which Holy Objects had been taken, sank in the Sea of Marmora. Another is that the Image Not-Made-By-Hands was taken about 1362 to Genoa, where it was presented to and preserved in a monastery dedicated to the Apostle Bartholomew.

In the time of the iconoclastic heresy, the defenders of icon-veneration, shedding their blood for the Holy Icons, sang the Troparion to the Image Not-Made-By-Hands.

The Image (the Holy Face) was put up as an emblem of the Russian armies, defending them from the enemy; and in the Russian Orthodox Church there is a pious custom that before entering a church, the faithful read together the prayers and the Troparion to the Image Not-Made-By-Hands.

We venerate Your most pure image, O Good One,
And ask forgiveness of our transgressions, O Christ God.
Of Your own will You were pleased to ascend the Cross in the flesh
To deliver Your creatures from bondage to the Enemy.
Therefore with thanksgiving we cry aloud to You:
"You have filled all with joy, O our Savior,
By coming to save the world."

Uncircumscribed Word of the Father
As we behold the victorious image of Your true incarnation,
Not made by hands,
But divinely wrought in Your ineffable and divine dispensation towards us,
We honor it with veneration!