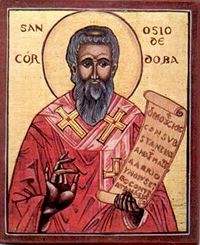 Our father among the saints Hosius the Confessor, Bishop of Córdoba (ca.256-358 AD), also known as Osius or Ossius , was a Spanish bishop of Córdoba, Spain for more than sixty years during the fourth century. As an ecclesiastical adviser to Emperor Constantine the Great he was one of the chief defenders of Orthodoxy in the West against the early Donatists and in the Arian controversy, which divided the fourth century early Christian Church. Hosius is generally believed to have presided at the First Ecumenical Council in Nicea. His feast day is celebrated on August 27.

St Hosius was probably born in Roman Córduba in Hispania, although a passage in Zosimus has sometimes been conjectured as the writer's belief that Hosius was a native of Egypt.

Consecrated bishop of Córdoba (ca.295), he narrowly escaped martyrdom in the persecution of Maximian (303-305). In 305 or 306 he attended the council of Elvira (Granada), and upheld its severe canons concerning such points of discipline as the treatment of those who had abjured (lapsed) their faith during the recent persecutions, and questions concerning clerical marriage.

From 312 to 326 Hosios acted as ecclesiastical adviser at the court of the holy emperor St Constantine the Great, who in 324 sent him as imperial emissary to the East to settle the Arian dispute. Hosius convoked a synod at Alexandria of Egyptian bishops and another at Antioch of Syrian bishops, at both of which Arius and his followers were condemned.

The saint also advised St. Constantine to convene the First Ecumenical Council at Nicea in 325, where Hosius was influential in securing the inclusion in the Nicene Creed of the key word homoousios. He was the first to sign the acts of this Council.

After a period of quiet life in his own diocese, Hosius presided in 343 at the Council of Sardica (now Sofia in Bulgaria). There and afterwards he spoke and wrote in favour of Athanasius of Alexandria, who was a principal opponent of Arianism.

The prestige given to the Orthodox cause by the support of the venerable Hosius led the Arians to bring pressure to bear upon Emperor Constantius II (who is often considered an Arian), who had him summoned to Milan where Hosius declined to condemn Athanasius nor to extend communion to Arians. He so impressed the emperor that he was authorized to return home.

More Arian pressure led to Constantius writing a letter demanding whether he alone was going to remain obstinate. In reply, Hosius sent his courageous letter of protest against imperial interference in Church affairs (353), preserved by Athanasius (Historia Arianorum, 42-45) which led to Hosius' exile and detainment in 355 to Sirmium, in Pannonia (in modern Serbia).

After being subjected to threats and physical violence, the old man Hosios, who was near his hundredth year, signed the Arian formula of Sirmium (357), and only then was he permitted to return to his diocese in Córdoba, but he retracted his signature before he died.