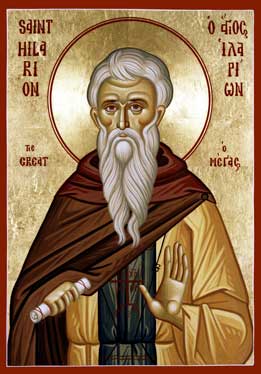 Saint Hilarion the Great was born in 292 AD at Tabatha, a town near Gaza in Palestine. His family were pagans. He converted to Christianity and was baptized after studying in Alexandria.

While he was in Egypt he became a disciple of St. Anthony the Great, an event which inspired him to devote himself entirely to the ascetic life.

When his parents died, he returned to Gaza and sold all of his inheritance, distributing all of his wealth to the poor. After this he departed for the desert of Palestine, devoting himself entirely to prayer and fasting. His asceticism was based on St. Anthony the Great's model. He fasted daily, eating only modest foods, lived in a hut made of reeds and practiced unceasing prayer. God rewarded his spiritual efforts and bestowed upon him the grace to perform miracles. His fame spread throughout Palestine, and it was not long before he fled these distractions and settled eventually in Cyprus.

By a flood of tears you made the desert fertile,
And your longing for God brought forth fruits in abundance.
By the radiance of miracles you illumined the whole universe!
Our Father Hilarion pray to Christ God to save our souls!

Today we gather to praise you with hymns,
O unfading light of the Spiritual Sun;
For you illumined those in the darkness of ignorance,
Leading all to the heights of God, as they cried:
"Rejoice, Father Hilarion, rampart of ascetics."