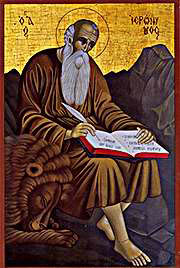 Our venerable and God-bearing father Jerome was noted as a scholar of Latin at the time when Greek was considered the language of scholarship. He was one of the most learned of the Fathers of the Western Church and is noted as the translator of the holy scriptures into Latin. This translation, the Vulgate, became the official biblical text of the Roman Catholic Church. During his early adult life he traveled extensively, learning Greek and Hebrew, while pursing his rhetorical and philosophical studies. Among the many treatises, commentaries, translations, and exegetical works that he undertook was the revision of the Latin bible using the more recent versions of the Hebrew Old Testament. An ascetic and harsh critic of secular excesses, he was a strong defender of the Orthodox faith against the heresies of his time. His feast day is commemorated on June 15.

Jerome was born Eusebius Sophronius Hieronymus around the year 340 in Stridonius on the border between Pannonia and Dalmatia, in what is now Bosnia/Herzegovina. While he was born into a Christian family he was not baptized until 360 when he journeyed to Rome. Under his father's direction he was well instructed at home before being sent to Rome for further study. While in Rome Jerome studied under Aelius Donatus as well as learning Koine Greek. From Rome he traveled into Gaul and on to Trier where he apparently began his theological studies. Then, about 373 he traveled east through Thrace and into Asia Minor. He stayed for a period in Antioch where, through visions when he was seriously ill, he resolved to lay aside his secular studies and plunged into study of the Bible. Looking to a life of asceticism he went into the desert of Chalcis. In this environment he began a study of Hebrew and found time for writing.

About 378 on returning to Antioch he was ordained a priest by Bishop Paulinus. Then shortly afterwards he traveled to Constantinople and continued his studies of the Scripture under the guidance of St. Gregory the Theologian. Invited to attend the synod of 382, he returned to Rome to be indispensable to Pope Damasus in the resolution of the schism of Antioch.

At this time he undertook the updating of the Latin Bible on the basic of the Greek New Testament and the Septuagint in an attempt to end the differences that had entered into the western texts. Having maintained a monastic lifestyle, his criticisms of the secular clergy led to increased hostility from the clergy and their supporters. With the death of Pope Damasus on December 10, 384, he lost his protection and so returned to Antioch in 385. There he found life in the secular world burdensome. He moved to Palestine to settle down to a life in a hermit's cell.

In this settled environment he began his most important works. During the last 34 years of his life he produced his best commentaries, his dialogue Against Pelagians, his most passionate polemics, and his revised translation of the Old Testament based upon earlier texts.

He died on September 30, 420, near Bethlehem where he was originally buried. His body is said to have been translated to the church of Santa Maria Maggiore in Rome although there are various claims that some relics are possessed elsewhere.