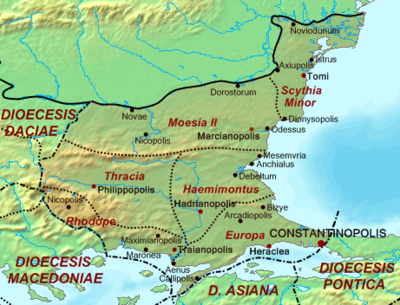 The city of Heraclea (Greek: Ἡράκλεια) was the site of a prominent episcopal see of the early Christian Church. The city was located on the shore of peninsula in the Sea of Marmara about 55 miles (90 kilometers) west of present day Istanbul. During early centuries, the see had jurisdiction over the local bishops of Thrace including the Bishop of Byzantium.

The city was founded by Greeks from the island of Samos about 600 BC and is located in the area known as Perinthus (Greek: Πέρινθος). According to John Tzetzes, the city was first known as Mygonia and later named Heraclea (Heraclea Thraciae, Heraclea Perinthus). Situated at the junction of several great sea routes the town became of commercial importance, seemly more important than Byzantium itself. It became famous for its resistance to Philip II of Macedonia in 340 BC. In the sixth century emperor Justinian restored its aqueducts and a palace. The ruins of the ancient town of Heraclea are located on a cape near the present city of Marmara Eregli in Turkey.

Over the centuries, three other towns bearing the name Heraclea were episcopal sees: two in Caria, that were suffragans of Stauropolis, and Heraclea of Pontus in Honorias, the suffragan of Claudiopolis. 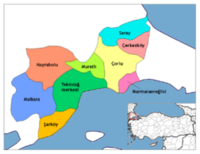 By tradition, Heraclea became a see early in the Christian era, during apostolic times, and was the senior see in the area that included that of the Bishop of Byzantium. Initially, the jurisdiction of Heraclea appears to have included five suffragan sees. The number of subordinate sees varied over time, increasing to as many as 15 to 17. Just before the Ottoman conquest there were six sees that later dropping to five. By the end of the Ottoman era the number of subordinate sees was two (Myriophyton and Metræ).

During the thirteenth century, with the fall of Constantinople to the Latins, the see of Heraclea was held by Latin bishops who resided in Heraclea. [1]

The following are among the prominent Orthodox incumbents of the see of Heraclea:[2]