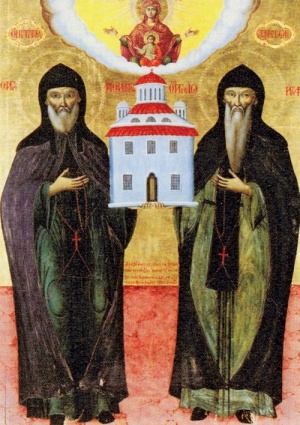 The Great Meteoron Monastery, also Megalo Meteoro and Metamophosis, is the main monastery in the Meteora complex in Greece. The community is also known as Monastery of the Transfiguration. It was founded by the monk Athanasius Koinovitis in the mid-fourteenth century.

Athanasius began the monastic community on the Platys Lithos, or Broad Rock, a few years after his arrival in the Meteora, which was the highest pinnacle. In 1356, the Serbian Emperor Symeon Uros endowed the community with funds to build the Katholikon of the Transfiguration and expanded the monastery. The katholikon has a twelve-sided dome that is 78 feet (24 meters) in height and a series of frescos that depict persecution of Christians by the Romans. The frescos were done by Theophanis.

About 1373, John Uros, the son of Symeon Uros, retired to the Grand Meteoron as the monk Ioasaph. He succeeded Athanasius on his death in 1383 and continued the expansion of monastery and the church until his death in 1422.