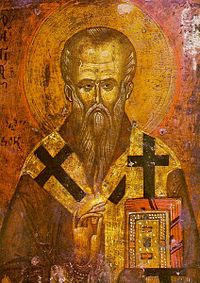 Our father among the saints Clement of Ochrid was a ninth century missionary to Moravia and disciple of Ss. Cyril and Methodius who became Bishop of Ochrid (sometimes rendered "Ohrid"). His feast day is July 27. He is also commemorated on November 25.

The early life of St. Clement is largely unknown. According to his hagiography by Theophylact of Ochrid, Clement was born in southwestern part of the Bulgarian Empire, in the region then known as Kutmichevitsa[1]. He was a member of the group of missionary priests that included Naum, Sava, Gorazd, and Angelar who supported the Apostles to the Slavs evangelizing in middle Europe. Having rejected German missionaries from the Western Church who required the use of Latin as the liturgical language, Prince Rastislav of Great Moravia requested Constantinople to send missionaries who could preach the Word of God in the Slavonic language. Arriving in Moravia as ascetics led by Cyril and Methodius, Clement and his fellow missionaries evangelized the Slavic tribes in the Slavonic language, using the Glagolitic alphabet devised by Cyril.

Thus, language became the center of the conflict with the Frankish and German rulers and clergy as the Germans used Latin. With their liturgy denigrated as a "heretical Slavic Liturgy", Cyril and Methodius, accompanied by Clement, twice had to defend their liturgy before the Pope of Rome, first before Pope Adrian II and, again, before Pope John VIII in 880, both who authorized its use.

During these years, the missionaries enjoyed the support of Prince Rastislav until 870. But, after Rastislav lost his realm to his nephew, prince Svyatopolk, who supported the German missionaries, the evangelization environment of the Slavic missionaries began to change as the Germans increasingly pressed the language issue. After the death of Methodius in 885 Pope Stephen V forced all the Slavonic speaking disciples of St. Methodius to leave Moravia, that is now part of the Czech Republic, after having subjecting them to trial and then dispersement.

Clement was among the disciples who were welcomed by the Bulgarian prince Boris to preach to his people in their language. As Bishop of Greater Macedonia, Clement received an appointment, in 886, to teach at Kutmichivitsa, a region in southwest Macedonia where he created separate schools for adults and for children. He organized a school at the princely court, which attained high esteem during the reign of Boris' son Simeon. St. Clement worked as a teacher until 893. In 893, St. Clement was named Bishop of Dremvitsa, or Velitsa.

St. Clement was the first hierarch of Bulgaria to serve, preach, and write in the Slavonic language. To this end he systematically prepared clergy from among the Slavic people. He labored for the glory of God into his old age. When his strength began to fail, and he was unable to fulfill his responsibilities in the cathedral, he asked Tsar Simeon to let him retire. But, Simeon urged him to continue his episcopal duties, to which Clement agreed.

Later, Clement left for Ochrid in Macedonia where he founded a monastery. There, he continued his translation activities and translated important parts of the Pentecostarion into Slavic. During 916, St. Clement became seriously ill and departed to the Lord. His body was placed in a coffin that he made with his own hands and was buried in the Monastery of St. Panteleimon which he founded at Ohrid.

Of the other members of his missionary group, the relics of Ss. Gorazd and Angelar rest near Berat in Albania, while the relics St. Naum are in the monastery bearing his name, near Lake Ochrid.

St. Clement is considered the first author in the Slavonic language. In addition to his continuation of the translation work begun by Ss. Cyril and Methodius, he also left behind works of his own composition, the first samples of Slavonic spiritual literature. Many of the lessons and sermons of St. Clement were brought to Russia, where they were read and copied by pious Russian Christians. He wrote a biography of Ss. Cyril and Methodius.