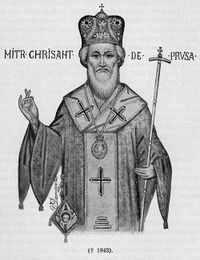 Archimandrite Chrysanthos of Madytos was a monastic of the Church of Constantinople who, with Gregory the Protopsaltes and Chourmouzios the Archivist, pioneered and was primarily responsible for the reform of the notation system for chanters of the Byzantine ecclesiastical music. They became known as the three teachers.

Little is known of the early life of Archim. Chrysanthos. He was born about 1770. He was well educated and culturally aware as he was an uncommonly well-educated and highly cultured archimandrite. He had an excellent knowledge of Latin and French and was familiar with European as well as Arabic music. Chrysanthos learned the art of chanting from Peter Byzantios and had taught singing.

With such an educational background and experience as a composer and educator, Chrysanthos became well aware of the need for more clarity in the process of studying and understanding of Greek church music. The old neumatic notation system used by chanters had become so complex and technical that only highly skilled chanters were able to interpret the symbols accurately. To simplify the interpretation of the symbols and the teaching of this difficult art, he invented a set of monosyllabic sounds for the musical scale based on the European sol-fa system but using the first seven letters of the Greek alphabet.

He also systematized the ordering of the eight modes into three species: diatonic, chromatic and enharmonic. Within each of these three categories, the intervallic progression of the degrees was fixed according to mathematical calculations. Archim. Chrysanthos also introduced new processes of modulation and chromatic alteration and abolished some of the notational symbols. The result of these efforts was a large repertory of hymnody that came available to chanters who were ignorant of the melodic and dynamic content of the old signs.

As his reforms broke with the traditional methods of teaching chanting, Archim. Chrysanthos was exiled to Madytos in Thrace by the Ecumenical Patriarchate. But, this did not stop him from pursuing his new and highly original approach to the teaching ecclesiastical music. In Madytos, he found that his pupils learned in ten months what had formerly taken ten years. The crucial device that speeded up the process of learning was his use of the newly invented solmization syllables.

In 1814, the Holy Synod of the Church of Constantinople headed by Patriarch Cyril VI, gave Chrysanthos a free hand to teach music as he saw fit. It was at this point that he joined forces with the protopsaltes Grigory and the archivist Chourmouzios, both of whom seem to have had less formal education than Chrysanthos, yet possessed a great natural ability for music. All three taught at the Patriarchal School of Music that opened in 1815 and ensured the success and propagation of the new notation system. The results of the research and teaching methods of Chrysanthos were published in Paris for the first time in 1821 in a treatise entitled Introduction to the theory and practice of ecclesiastical music written for the use of those studying according to the new method.