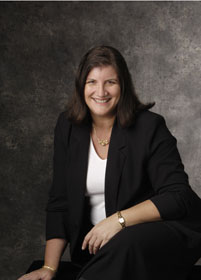 Valerie A. Karras is a Professor at Perkins School of Theology at Southern Methodist University

Dr. Valerie Karras is Assistant Professor of Church History at the Perkins School of Theology at Southern Methodist University. From 2003 to 2004, she served as Research Associate at the Thesaurus Linguae Graecae, an online digital Greek library based at the University of California, Irvine. From 1998 to 2003, she was Assistant Professor of Greek Patristics in the Department of Theological Studies at Saint Louis University. In 1993, Dr. Karras came to Holy Cross Greek Orthodox School of Theology as a fellow-in-residence, then continued as assistant professor at both Holy Cross and Hellenic College from 1994 to 1996. From 1996 to 1997, she served Hellenic College and Holy Cross as Assistant Director for Institutional Planning and Special Projects. She has also been an adjunct lecturer in the Departments of Classics and Religious Studies at Washington University in St. Louis. Dr. Karras has earned doctorates in patristic theology from the Aristotelian University of Thessaloniki and in church history from The Catholic University of America in Washington, DC. She also holds a Master of Theological Studies degree from Holy Cross Greek Orthodox School of Theology.

Valerie Karras' areas of research interest include women in early and Byzantine Christianity, gender in early church theology, and Orthodox Christianity in ecumenical, interreligious, and feminist conversation. She has published articles, translations, and book reviews in scholarly journals such as Church History, the Journal of Early Christian Studies, and Theological Studies, and in such books as the Cambridge Companion to Feminist Theology and Holy Women of Byzantium. She is completing revisions to her first book, Women in the Byzantine Liturgy, which will be published by Oxford University Press.

Dr. Karras has been invited widely to lecture and has presented papers at numerous academic conferences. She is a member of the editorial board of The St. Nina Quarterly, an international journal for Orthodox women, and she has served on the boards of directors of the North American Academy of Ecumenists and the Collegeville Institute for Ecumenical and Cultural Research at St. John’s University. She has also been a member of the steering committee of the Eastern Orthodox Studies Group for the American Academy of Religion, and currently serves on the board of the Society for Buddhist-Christian Studies. She is a member of several academic and professional organizations, and has been awarded fellowships, grants, and other. recognition.

Dr. Karras' avocation is music: she holds a diploma in Byzantine music from Greece and has served as served as chanter, choir director, and organist at various Orthodox parishes.