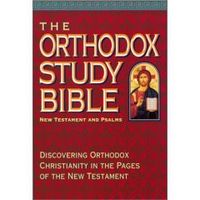 The Orthodox Study Bible: "Discovering Orthodox Christianity in the Pages of the New Testament"

The Orthodox Study Bible is a translation and annotation of the Bible currently in production by clergy and laity within the Orthodox Church. The text of the New Testament and Psalms translation is currently the New King James Version accompanied by Orthodox viewpoint commentary. The Old Testament in the new edition, was translated from the Septuagint1 using the New King James Version as the template, and is accompanied by Orthodox viewpoint commentary.

Throughout the translation various aspects of the Orthodox faith are shown to the reader such as morning and evening prayers, icons (12 icons included under heading “Illustrations”), lectionary, history of the Orthodox Church and general Christian history. The OSB is for those who are unfamiliar to the faith and is used as an aid in worship to those who are members of this ancient faith.

The first version, containing the Psalms and the New Testament, was published in 1993 by Thomas Nelson. It is currently being published by Conciliar Press. 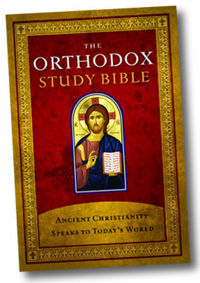 The Old and New Testaments edition, subtitled "Ancient Christianity Speaks to Today's World" came out in February of 2008. It includes a new translation of the Psalms by Dr. Donald Sheehan of Dartmouth College.

Despite positive endorsements2 by such prominent bishops as Metropolitan Maximos of Pittsburgh (a general editor) and Metropolitan Philip of New York (Chairman of the Board of Directors), most scholars and commentators have criticized both the translation (not so much a LXX translation as a Masoretic / LXX hybrid) and quality of the study notes of the OSB. Representative of most reviews are the following excerpts:

"If my comments seem harsh it is because the OSB could have been better, and should have been better. As I've mentioned before, if the OSB had managed to package an Orthodox approach to Scripture within the limits of a Protestant-style study bible, I'd be much more gentle in my criticism. That the OSB should prove to be so deeply foreign not only to the ethos of Orthodox Christianity, but to its doctrine and teaching as well is simply unforgivable." [1]

”The notes to the New Testament are on the whole straightforward and some readers will find them a help in understanding many of the words and ideas in the text. Most of them though are dull and many of them jejune in the extreme. As a friend put it to me, they remind one of the notes to some school editions of Shakespeare. ‘King Lear plans to divide his kingdom between his daughters’, or ‘Hamlet wonders if it would be a good idea to commit suicide.’ In this book we find similar notes all too often, such as that on Luke 16:11: ‘True riches signify spiritual treasures’, or that on Luke 16:25 ‘This conversation is not between God and the rich man, but between Abraham and the rich man.’ The level is that of a not very bright Sunday School class. Critical questions are avoided by simply not being discussed at all. This is unsatisfactory, since many readers will be seeking help on just these questions. What should have been provided is an article setting out clearly how an Orthodox reader of the Bible should approach these problems. The solution adopted here is a further instance of what I call the attitude of the double-headed Byzantine ostrich." [2]

"The tragedy of the OSB is that, as Kevin Edgecomb once put it privately to me, it should have been better, and in fact was once better. Kevin has recently sent me a number of early drafts of the OSB that were once available online for all to see; these show that the OSB was once an honest-to-goodness translation of the Septuagint, and a rather satisfactory one, at that. However, somewhere along the line (and in all likelihood on account of Thomas Nelson's–the same company headed by an Orthodox deacon, I might add–overriding pressure to market the NKJV by making this an 'Orthodox NKJV' or some such beast), the project became the dubious, embarrassing 'translation' that we all have seen. One only need ask Father Patrick Reardon what happened to his translation of the Psalms; other contributors have simple become too jaded by it all and prefer not to speak of the subject. I think your observation that the people responsible for the OSB have simply ignored most of the criticism of the OSB is very important. One only needs to re-read Fr Ephrem's review to realize that nearly nothing that he rightly criticized in the earlier volume has changed in that later one. This inability to take constructive criticism, which smacks of the hubris of the Americanist brand of convertitis, is surely a major cause that the OSB isn't better that it is." [3]