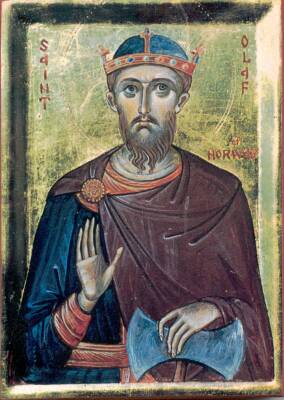 The holy, glorious, right-victorious martyr and right-believing King Olaf II of Norway (sometimes spelled Olav) is also known as Olaf Haraldson and was a son of Earl Harald Grenske of Norway. During his lifetime he was also called Olaf the Fat. He was born in 995 A.D., and ruled Norway from 1015 to 1028, when he was exiled. He died two years later on the field of battle at Stiklestad, killed for his support of the Christian faith and his attempt to unite Norway into one nation. His feast day is July 29.

He should not be confused with his predecessor Olaf Tryggvason (King Olaf I of Norway).

He is the great Norwegian legislator for the Church, and like his predecessor Olaf Tryggvason, made frequent severe attacks on the old faith and customs, demolishing the temples and building Christian churches in their place. He brought many bishops and priests from England, as King Canute IV later did to Denmark. Some few are known by name (Grimkel, Sigfrid, Rudolf, Bernhard). He seems on the whole to have taken the Anglo-Saxon conditions as a model for the ecclesiastical organization of his kingdom.

Many miraculous occurrences are related in connection with his death and his disinterment a year later, after belief in his sanctity had spread widely. His friends, Bishop Grimkel and Earl Einar Tambeskjelver, laid the corpse in a coffin and set it on the high-altar in the church of St. Clement in Nidaros (now Trondheim). Olaf has since been held as a saint, not only by the people of Norway, whose patron saint he is, but also by Rome. Orthodox Christians also venerate him as one of the ancient western saints of the Church before the Great Schism.

His cult spread widely in the Middle Ages, not only in Norway, but also in Denmark, Sweden, and even as far as England; in London, there is on Hart Street a St. Olave's Church, long dedicated to the glorified King of Norway. In 1856 a fine St. Olave's Church was erected in Christiania, the capital of Norway, where a large relic of St. Olaf (a donation from the Danish Royal Museum) is preserved and venerated. The arms of Norway are a lion with the battle-axe of St. Olaf in the forepaws.

Holy King Olaf is also seen as being instrumental in the Christianization of both Iceland and the Faroe Islands. Both countries, under the influence of the Danish monarchy under which the islands were heavily subject until the 20th century (Iceland now independent since 1945 and the Faroe Islands having been granted substantial autonomy), became Lutheran during the Protestant Reformation. Nonetheless, despite centuries of absence from either the Catholic or Orthodox fold, St. Olaf is held in high honour. His feast day of July 29th, called in Faroese Ólafsøka, or St. Olaf's Vigil, is the national holiday of the Faroe Islands.