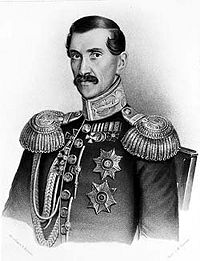 Count Nicholas Alexandrovich Protasov was a Russian military officer, statesman, and from 1836 to 1855 Ober-Procurator of the Apostolic Governing Synod, the Imperial government governing agency overseeing the Church of Russia.

Nicholas Alexandrovich was born on December 27, 1798 to the Privy Council, Senator Alexander Yakovlevich and Barbara Protasov (nee Bakhmeteva). He entered the Life Guards Hussars as a cornet at the age of fifteen. Count Nicholas married Princess Natalia Golitsino the daughter of Prince D. V. Golitsyn, the Governor-general of Moscow.

Count Nicholas participated in the War with Turkey in 1828 and in the Polish campaign in 1831. Upon completion of his active military service in 1834, with the rank of colonel, he was appointed a member of the Governing Board of schools and to the committee on educational institutions, as well as the chief of censorship. In 1835, he was appointed Deputy Minister of Education and was charged with the oversight of the educational institutions and the Rumyantsev Museum.

On February 24, 1836, Nicholas Alexandrovich was appointed Ober Procurator of the Holy Synod and a member of the Commission for Religious Schools. As ober procurator, he instituted improvements in the spiritual schools as well as the seminaries and introduced programs that included the subjects of science, medicine, and agriculture. He emphasized the use of the Russian language in courses over Latin and introduced improved text books. In this his aim was to bring the religious schools closer to the curriculum of secular schools and thus graduate future priests who would be closer to the people. He also instilled into the schools a sense of discipline.

Nicholas Alexandrovich reposed in St. Petersburg on January 16, 1855 and was buried at the Donskoy Monastery in Moscow.