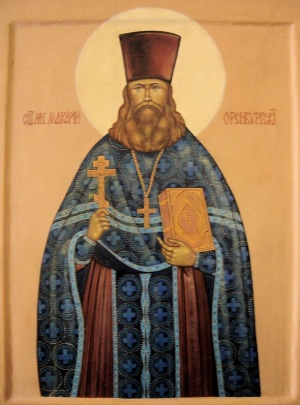 Icon of St. Makary of Orenburg

Archpriest Macarius (Makary) Kvitkin (Russian: Макарий Фёдорович Квиткин) was a priest in the Russian Orthodox Church. Born in Orsk, Orenburg Provence, Russia, in 1882, he became a teacher before pursuing the priesthood. In 1925, he became the second priest at a large church dedicated to St. Seraphim of Sarov in Forshtadt, a suburb of Orenburg. After Metropolitan Sergius issued his infamous declaration of 1927, pledging the loyalty of the Russian Orthodox Church to the Bolshevik state, Fr. Macarius, along with most of the parishioners of his parish, refused to accept this, initially causing schism within the parish, as the head priest supported Metropolitan Sergius. However, a peaceable solution was reached, and Fr. Macarius became the rector of the parish. The peace was short-lived, however, as the Soviet persecution of the Church continued, eventually forcing the parish to be shut down. Fr. Macarius, with wife and children depending on him, was heavily pressured to publicly renounce his faith in the hope that if he did, a large number of St. Seraphim's faithful would follow. Fr. Macarius refused, and in 1930 the church was closed and he and his family lived a destitute existence. In January, 1931, Fr. Macarius was arrested, despite failure to find any basis for it. His wife and oldest daughter last saw him alive, seemingly healthy and in good spirits, on 31 March 1931. They were detained, and the next morning, 1 April, Palm Sunday of that year, they were notified of Fr. Macarius' death.

Fr. Macarius was glorified as a saint along with many of Russia's New Martyrs in 1981. His feast day is March 23