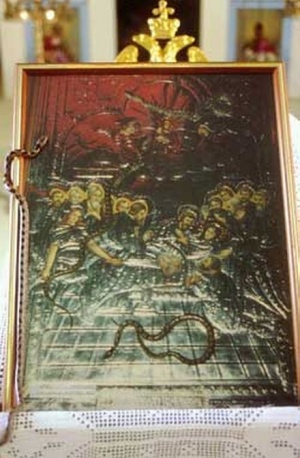 Holy Snakes, Church of Virgin Mary, Lagouvarda (Virgin Mary of the snakes)
The phenomenon of the Holy Snakes of the Virgin Mary has been occurring for centuries during the festivities to the Theotokos between August 5 and August 15 in the village of Markopoulo on the island of Kefalonia, Greece. The small black snakes appear at the church of Panagia of Langouvarda on the site of a monastery, established as a nunnery and dedicated to Our Lady of Langouvarda.

The myth about these snakes is attached to the year the monastery was attacked by pirates in 1705. The nuns prayed fervently to the Virgin Mary for protection and were subsequently transformed into the snakes to avoid being taken as prisoners.

The snakes have a small cross on their head and their tongues are also in the shape of a cross. They are known to belong to the Telescopus fallax species, also known as the European Cat Snake, and they appear in and around the courtyard of the church, on the walls and on the bell tower. The snakes show no fear while the services are held and are harmless during the festivities. As soon as the Liturgy concludes on the 15th of August, they become hostile and aggressive and disappear back into the wilderness of the area. The snakes cannot be found until the following year.

The inhabitants of the villages consider them to be holy, collecting them and setting them on the silver icon of the Virgin of the Snakes (Panagia Fidoussa). It has been documented by the locals that during World War II and the year of the island's destructive 1953 earthquake in August, the snakes failed to appear. The locals now use this as a sign that if the snakes do not show just before the 15th of August that something bad is imminent.

Also on the island of Kefalonia at a different church on May of each year, women of the island pick lilies and place them on the icon of the Virgin Mary. Once a flower is cut and its stem is completely dry it can not bud again, but these dried lilies, on the 15th of August fully blossom again, they don't begin the blossoming on the previous days, but they begin and reach the full blossom on the 15th.