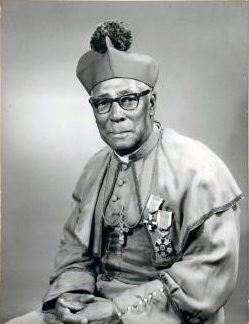 Daniel William Alexander was a Roman Catholic of African ancestry who became associated, during the nineteenth century, with the movement to establish a African Orthodox Church which led to the enlightenment of the Sub-Saharan Africans to Orthodox Christianity.

Daniel William Alexander was born on December 23, 1883 in Port Elizabeth, Cape Provice, of what is now the Republic of South Africa. The ancestry of his parents is uncertain. His father was a French subject apparently from Martinique in the French West Indies and his mother an African of Cuban and Javanese extraction. He was raised a Roman Catholic. His first wife was Maria Horsley.

During the Second Anglo-Boer War, while living in Johannesburg, he was drafted by the British to serve as a cook and went to Natal, now part of the eastern part of the Republic of South Africa. Arrested as a British spy, he was imprisoned in Pretoria before being released after the British took the city. During this period his wife died. Through assisting an Anglican priest, Father Godfrey, with a funeral, he became an Anglican and began to study for ordination. While a catechist at St. Cuthbert's Anglican Church in Pretoria, he met and married his second wife, Elizabeth, on August 29, 1902. In 1914, Alexander left Pretoria and the Anglican Church and joined the Ethiopian Catholic Church in Zion that liturgically was based on Anglican services.

About 1920, Alexander joined the African Church of J. Khanyane Napo, who had also been a member of the Ethiopian Catholic Church in Zion. While stationed in Kimberley, he became tired of being summoned to Johannesburg for meetings that consisted of quarrels among the Napo church leaders.

When, in May 1935, Alexander wrote to Archbishop Isidore of the Greek Orthodox Archdiocese of Johannesburg asking for letters of introduction to Fr. Nikodemos Sarikas of Tanganyika and the Patriarch of Jerusalem, Abp. Isidore replied that he should instead visit the Patriarch of Alexandria. Alexander arrived in Kenya on November 18, 1935, and founded a seminary at Gituamba with eight students.

After the death of McGuire in late 1934, the relationship between the South African and the American churches continued to be amicable under a new patriarch in America.

In June 1937, he ordained two of his students, Philip Kiande and Arthur Gatung’u as priests and two, Harrison Gachukia and Daudi Maina, as deacons and returned to South Africa. In 1941, the African Orthodox Church in South Africa received government recognition.

In 1960, two bishops from the American branch of the AOC, including AOC Patriarch James I, were invited to South Africa by Alexander, now 78 years old, to consecrate two new bishops to provide for an established succession. Shortly after the consecration, James I requested Alexander's resignation, which he refused to do. While in dispute, James and his bishop Motsepe died. Although Alexander apparently reconciled with the new AOC patriarch, Peter IV, Alexander was deposed in 1963.

In later years, Alexander changed the name of his branch of the AOC to the African Independent Orthodox Church.

In May 1970, Alexander died at the age of 88. After his death, the AOC broke up into several factions mainly as a result of American interference.