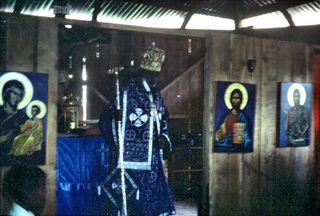 His Grace Bishop George Arthur Gathuna (Γεώργιος Άρθουρ Γκαντούνα), 1905 - July 16, 1987, was the bishop of Nitria of the Archdiocese of Kenya from 1973-1979 under the Church of Alexandria.

In June 1937 he was ordained as a priest by Bishop Daniel William Alexander.

In the 1930s a spontaneous movement of indigenous Africans towards the Orthodox Church began in Uganda under the leadership of a former Anglican, Reuben Spartas. In 1946 the fathers Spartas and Obadiah visiting Kenya. On their own autonomous motivation the "African Orthodox Church of Kenya" came into communion with the Patriarchate of Alexandria and the head of this Church Arthur Kaduna was ordained the first Kenyan Orthodox priest named George.

Also in the 1950s, fought, along with many orthodox priests in the movement for independence from colonial Kenya (At the same time, the protestant and catholic priests called the uprising a rebellion of pagans and savages). Kaduna spent 10 years in prison, along with leader of the Kikuyu tribe and country's future president Jomo Kenyatta.

The Orthodox communities in East Africa that had been founded under his leadership were organized into the Metropolis of Irinoupolis with headquarters in Nairobi in 1958. He was first Bishop of Kenya and the first Kenyan Missionary to the people of Bunyore.

In 1972 he was elected titular Bishop of Nitrea, Assistant Bishop of the Metropolis of Eirenoupolis. He was consecrated on 25th February 1973 at st. Paul, Kagira.

In 1974 Bishop George Gathuna, hence the split in the Orthodox Church into African and Greek Orthodox.

On 30th November 1979 Bishop George (Gathuna) was defrocked, caused by what he called a problem of leadership and authority. However, the Patriarchate accused him of a lack of vision.

Following his defrocking Bishop George (Gathuna) joined a schismatic group under a bishop in Greece that followed the old calendar (Metropolitan Cyprian of Oropos and Fili - Holy Synod in Resistance). Several other Orthodox Christians in Kenya followed him.

17th November 1986 he was was reconsecrated as the Bishop of the African Orthodox Church of Kenya, Given the name Niphon Kigundu.

On July 16, 1987, the defrocked Bishop George Gathuna reposed, and his burial was attended by Metropolitan Cyprianos from the Old Calendar Orthodox Church of Greece.

Eventually however, the schism was healed, and on November 1, 2006, Bishop George Gathuna of Nitria was reinstated posthumously by Patriarch Theodoros II and the Holy Synod of the Patriarchate of Alexandria.