Beheading of St. John the Forerunner 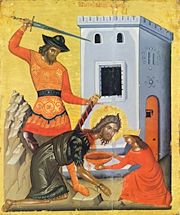 The Beheading of the Holy Glorious Prophet, Forerunner, and Baptist John

Although the Forerunner was beheaded in the Spring, around the time of the Passover, this feast was fixed for August, when a church was dedicated in its honor.

The memory of the righteous is celebrated with hymns of praise,
But the Lord¹s testimony is sufficient for you, O Forerunner.
You were shown in truth to be the most honorable of the prophets,
For you were deemed worthy to baptize in the streams of the Jordan Him whom they foretold.
Therefore, having suffered for the truth with joy,
You proclaimed to those in hell God who appeared in the flesh,
Who takes away the sin of the world, and grants us great mercy.

The glorious beheading of the Forerunner,
Became an act of divine dispensation,
For he preached to those in hell the coming of the Savior.
Let Herodias lament, for she entreated lawless murder,
Loving not the law of God, nor eternal life,
But that which is false and temporal.