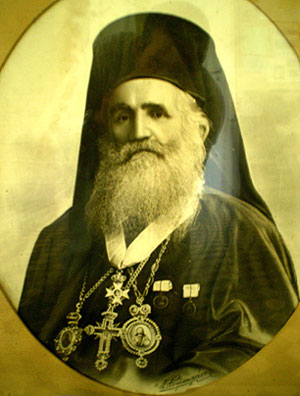 Vasileios Papachristou (Greek: Βασίλειος Παπαχρήστου) was born in 1858 in Labove e Kryqit[1] in the District of Gjirokastre, now part of present day Albania. When he entered the Holy Orders he was given the name Basil (Vasileios). He became bishop of Dryinoupolis at the turn of the century as the status of the area of northern Epirus was contended for between the Greeks and Albanians amid European imperial maneuvering during the first decade of the twentieth century.

Members of the Greek minority in Albania, Metr. Basil and the Greek population of Epirus were unhappy with the sale of northern Epirus to the principality of Albania under the December 1913 Protocol of Florence. As the Greek government in Athens was reluctant to upset the negotiations among the European powers, the resolute Greek Epirote decide to declare independence.

On February 17, 1914, Metr. Basil became one of the signers of the declaration of independence of the Autonomous Republic of Northern Epirus in Argyrokastro (Gjirokastre). Soon after, he became Minister of Justice and Religion in the provisional government headed by Georgios Christakis-Zographos.

After successfully taking control of Northern Epirus in October 1914, the Greeks were driven from the territory in September 1916 by Italian and French forces that then closed all the Greek schools. As the Italian administration considered Metr. Basil an agent of Greece, he was expelled. His protests to the Greek Prime Minister Eleftherios Venizelos for help were in vain. Then, after World War I, the protocol of 1913 was confirmed and Northern Epirus was awarded to Albania in 1921. Metr. Basil was then exiled from his home territory.