The baptistery or baptistry (Latin: baptisterium, from Greek: βαπτίζειν), in Orthodox Christian practice, is a structure (building) or room in a building wherein people ritually become members of the Church of Jesus Christ through the sacrament of baptism.

As the singular symbol of membership in the Orthodox Christian Church, the sacrament of baptism has been of central importance in the Church. 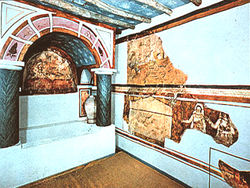 The baptistry may be located within the main structure of a church or as a separate structure located adjacent the church. Commonly, the sacrament of baptism for those becoming Orthodox Christians is conducted in the nave of the church, generally in portable pools or fonts. In some churches the font or baptismal pool may be "built-in". Baptistries were found in many early churches in Asia Minor and Italy, as illustrated in the third century in the Church at Dura-Europus[1]. A sixth century example can be found in the Great Church of Holy Wisdom (Hagia Sophia) in present day Istanbul.