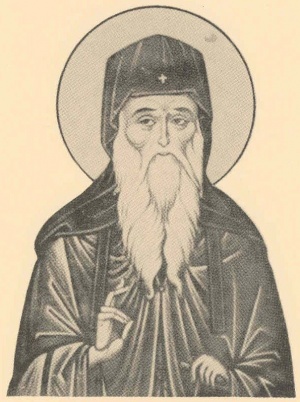 His Feast days are celebrated on January 31 and August 18 (uncovering of his relics). He is a saint local to the Metropolis of Paronaxia under the jurisdiction of the Church of Greece.[1] St Arsenius of Paros was glorified by the Patriarchate of Constantinople in 1967.

St. Arsenios was born to faithful parents in Ioannina as Athanasios Sergiades. He was orphaned as a young child. At nine years old, he travelled to Kydonies of Asia Minor where he studied in the local school, under the patronage of Archimandrite Gregory, a man renowned for his virtue and knowledge.

He studied there for five years. During his final years, he was acquainted with the renowned elder, Daniel, whom he followed to Mount Athos where he was tonsured with the name Arsenios.

During his six year stay on Mount Athos, he was characterised by his exemplary obedience. He left Mount Athos to follow Elder Daniel to the Holy Monastery of Penteli and later the Monastery of Falegandrion.

Following the repose of Elder Daniel, he sought to return to Mount Athos, but a chance encounter with Archimandrite Elias Georgiades, the preacher of Cyclades, he was convinced to stay in Paros by the enlightened preacher at the Monastery of Saint George where he dedicated himself to great spiritual struggles through unceasing prayer and vigils, fasting and the study of God's law. To those who witnessed his struggle, he was an Angel in the flesh, eating and sleeping only enough to sustain the body.

Witnessing his holiness, his patience and humility, the fathers recommended he be ordained, but he would not accept until this was asked of him by Metropolitan Daniel of Cyclades. People flocked from all over Greece to receive his counsel and blessing. His ministry revealed him to be a worthy continuation of the great monastic fathers.

Following the repose of Abbot Elias, he was elected abbot of the Monastery of Saint George. Simultaneously, he served the liturgical needs of the Convent of Christ (of the Forest) in Paros. However, the increasing visitations of the faithful meant that he resigned from his administrative duties and dedicated himself wholly to his spiritual work.

His spiritual struggles impacted his physical health. Foreseeing his repose, he gathered the nuns and gave them his final counsels. On the January 30, 1877, after serving the Divine Liturgy, he said, "my children, this is the last liturgy that I have served". On January 31, after offering himself as a living sacrifice to God, he reposed in the Lord, his last words being, "into Your hands, Lord, I submit this flock which You entrusted to me. I am Yours, Lord, for I sought Your judgments".

"Practice self-observation. And if you want to benefit yourself and your fellow men, look at your own faults and not those of others. The Lord tells us: "Judge not, that ye be not judged," condemn not that ye be not condemned. And the Apostle Paul says: "Who art thou that judgest another man's servant?"

"If you want Christ to bless you and what you have, when you meet some poor individual, who is hungry and asks you for food, give him. Also, when you know that some poor man, or a widow, or an orphan are hungry, do not wait for them to ask you for food, but give them. Give with pleasure, and be not afraid that you will become indignant. Have faith that Christ invisibly blesses your few possessions, and you shall never starve, nor will you be in want till the end of your life."