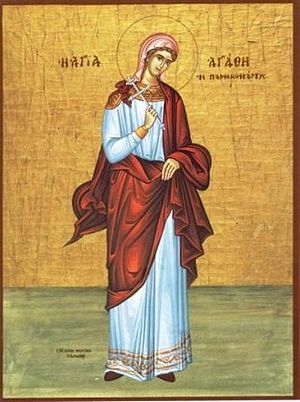 The holy Martyr Agatha (feastday: February 5) came from the city of Panormos (today called Palermo) on the island of Sicily. She shined with bodily beauty (which was not damaged by the ravages of time) and spiritual fairness, but was also full of riches and material goods. She lived during the reign of the Emperor Decius in 251. Because she was a Christian, she was handed over to the governor, Cutianus. First she was delivered to another unfaithful woman, called Aphrodisia, in order to be turned away from Christ's holy faith by her exhortations. But the saint firmly kept her piety, desiring to suffer martyrdom rather than deny Christ. So they beat her heavily and cut off her breasts, but she was restored to health by the Apostle Peter, who appeared to her in prison. In later Western art, Agatha is often depicted holding up her breasts on a platter. Then they dragged her on bricks and burnt her badly. Next, they put her in prison and, while she was there, she commended her soul to the hands of God.

Your lamb Agatha, calls out to You, O Jesus, in a loud voice:
"I love You, my Bridegroom, and in seeking You I endure endure suffering.
In baptism I was crucified so that I might reign in You, and I died so that I might live with You.
Accept me as a pure sacrifice, for I have offered offered myself in love."
Through her prayers save our souls, since You are merciful.

May the Church be robed today in a garment of glorious porphyry,
Dyed by the pure blood of the martyr Agatha,
And let us cry out: "Rejoice, pride of Catania!"

Lives of the Saints for the Whole Year by St. Nicodemus of the Holy Mountain (18th century) [1]