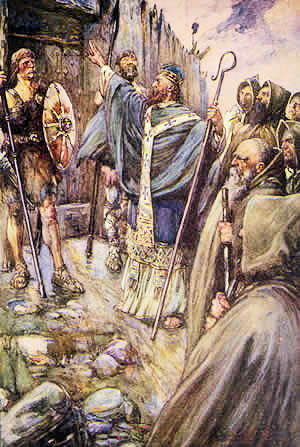 Iona's first abbot, Saint Columba, before the fortress of the Pictish king.

The Abbot of Iona was the head of Iona Abbey during the Middle Ages and the leader of the monastic community of Iona, as well as the overlord of scores of monasteries in both Scotland and Ireland, including Durrow, Kells and, for a time, Lindisfarne. It was one of the most prestigious clerical positions in Medieval Europe, and was visited by kings and bishops of the Picts, Franks and Anglo-Saxons. The Ionan abbots also had the status of 'Comarba of Colum Cille' (i.e. the successors of Saint Columba).

Iona's position as the head of the Columban network (familia) of churches declined with the presence of abbots based at Derry, Raphoe, Kells and Dunkeld. In Scotland, the abbots of Dunkeld ruled much of central Scotland in the 11th century, and functioned as one of the most important politicians of northern Britain.[note 1]

At the beginning of the thirteenth century, the monks of Iona adopted the Benedictine rule.[note 2]

During the abbacies of Diarmait and Indrechtach, almost certainly because of Viking attacks, the relics of Columba were moved to other monastic houses in the Columban familia, such as Kells, Raphoe and Dunkeld. The position of abbot on Iona ceases to have the same significance within the Columban monastic familia, and many comarbai are not based on the island.