The good and true William of Gellone, also in French: Guillaume d'Orange, Guillaume Fierabrace, and the Marquis au court nez, was the Count of Toulouse who, as an exemplar Christian knight, defended medieval France from invading Muslim forces during the turn of the eighth to ninth centuries. Near the end of his life he founded a monastery at Gellone to which he retired as monk. His feast day is May 28. 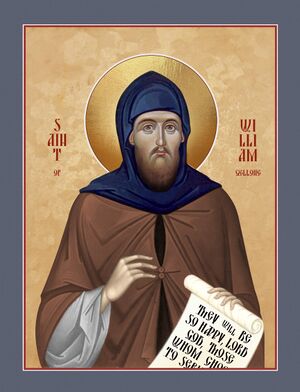 William was born in 755 into the ruling families of France. His father was Thierry IV, the Count of Autun and Toulouse. His mother, Aldana, was the daughter of Charles Martel, thus, making him a cousin of Charlemagne. William spent much of his youth at the court of Charlemagne.

In 790, William was made Count of Toulouse, a title he held until 811, and was charged with the care of Louis the Pious, the son of Charlemagne. In 793, William led the defense against, and defeat of, Hisham I at Orange who was conducting a holy war against the Christians of Asturias and Languedoc. Later, Count William met the Muslim forces again at Villedaigne where he stopped their advance but could not force the Muslims from Narbonne.

Over the years the life of William of Gellone has been romanticized in literature as a noble Christian knight and included for centuries in legends and fantasies as well as in pseudo-historical books.