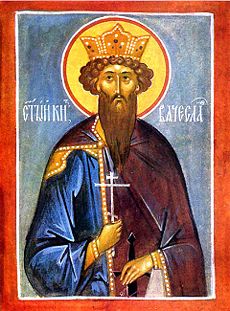 St. Wenceslaus, Prince of the Czechs.

The holy martyr Wenceslas (or Wenceslaus) (born 907, died September 28, 935 or 929) was the son of Vratislaus I, Duke of Bohemia. His father was raised in a Christian milieu through his father, Borivoj, who was converted by Saints Cyril and Methodius, the "Apostles to the Slavs". His mother, Drahomira, however, was the daughter of a tribal chief who held on to paganism, as did many Czech nobles at the time, fearing that the arrival of Christian bishops would threaten their authority. Wenceslaus himself was martyred and is venerated as a saint.

When Wenceslaus was thirteen his father died and he was brought up by his grandmother, Saint Ludmila, who raised him as a Christian. A dispute between the fervently Christian regent and her daughter-in-law drove Ludmila to seek sanctuary at Tetín Castle near Beroun. Drahomíra, who was trying to garner support from the nobility, was furious while losing influence on her son and arranged to have Ludmila strangled at Tetín on September 15, 921. According to some legends, having regained control of her son, Drahomíra set out to convert him to the old pagan religion. According to other legends she was herself a Christian.

In 924 or 925 Wenceslaus assumed government for himself and had Drahomíra exiled. After gaining the throne at the age of eighteen, he promoted the spread of Christianity throughout Bohemia. This was accomplished not only by building churches, such as future St. Vitus Cathedral (named after a Roman saint whose body was translated to Saxony from St. Denis) at Hrad�?any Hill in Prague, but also by his acquiescence to the influence of the Holy Roman Empire. As such, the pagan nobility of Bohemia saw Wenceslaus and his faith as a threat not only to their pagan tradition, but also to their very sovereignty.

Early in 929 Wenceslaus became an "amicus" (Friend, but with lower prestige) of the German King Henry I the Fowler, although it remains unclear as to whether this was the result of a voluntary submission or forced upon Wenceslaus by a German invasion. Some chroniclers identify either the growing German influence or hostility to Wenceslaus' religious policies as the main reason for his death.

In September of 935 (or 929), a group of these nobles allied with Wenceslaus' younger brother, Boleslaus (Boleslav I of Bohemia), in a plot to kill the prince. In addition to having been raised in the pagan tradition by Drahomira, Boleslaus had the added incentive of being Wenceslaus' successor to the throne. After inviting his brother to the feast of Saints Cosmas and Damian, he murdered him on his way to church and thus succeeded him as the Prince of Bohemia. (Note the title Prince, indicating independence from the Catholic Holy Roman Empire, as opposed to Duke, the title granted by the Empire to Wenceslaus). Purportedly Wenceslaus was murdered by being hacked to death at the door of the church in the town now called Stará Boleslav.

According to Cosmas' chronicle, that day one of Boleslav's sons was born, and because of the ominous circumstance of his birth the infant was named Strachkvas, what means "a dreadful feast".

There are discrepancies in the records regarding the date of Wenceslaus' death. It has been argued that Wenceslaus' remains were transferred to St Vitus's Church in 932, ruling out the later date; however, the year 935 is now favoured by historians as the date of his murder.

Canonization and other memorials

In his honour, a statue of Wenceslaus clad in armour on horseback stands in Prague's Václavské náměstí (Wenceslaus Square). He is best known outside the Czech Republic as the subject of the Christmas carol "Good King Wenceslas".