Synod of the Oak 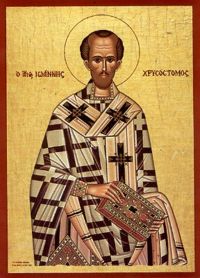 In 402, Theophilus, Archbishop of Alexandria, suddenly brought charges against a group of Egyptian monks, who had been his friends, and began to persecute them as Origenists. The monks fled Egypt, with a number of them particularly the so-called four “tall brothers” going to Constantinople to plead to the Emperor Arcadius. In response the emperor summoned Theophilus to Constantinople to appear before a council and apologize to the monks. In the meantime, Theophilus attempted unsuccessfully, through St. Epiphanius of Cyprus, to get Abp. John to also condemn the monks as Origenists. Abp. John, during this time, had delivered a sermon against the vanity of women and their desire for luxury. A report was made to Empress Eudoxia that the sermon was aimed at her. The empress, who had already been at odds with Abp. John, was further embittered by the sermon.

In June 403, Theophilus finally arrived in Constantinople, but not alone as he was commanded. With him, he brought twenty nine of his bishops and much money and gifts. [1] After arriving in the capital he settled in one of the imperial palaces and began to confer with Patr. John’s adversaries. Later he moved to a villa, called Epi Dryn, near Constantinople where he, his bishops, and seven other bishops prepared an agenda of unfounded accusations against Chrysostom. [2]

When the synod was convened, it no longer was an assembly meant to judge Theophilius as ordered by the emperor, but one that ordered Patr. John to present himself to it and apologize. The prosecution was presented by Severian, Bishop of Gabala in Syria, who earlier had been ordered to leave Constantinople for his involvement in a plot against the patriarch. [3] Not recognizing the legality of the synod, Chrysostom refused the order for his attendance to be judged by it, before a group that were his open enemies. After he had refused a third summons, the synod, with the agreement of emperor Arcadius, declared him deposed. Chrysostom, then, freely surrendered himself to the soldiers to avoid any useless bloodshed and went into exile.

The reactions of the people to the deposition of their beloved patriarch and the occurrence of a sudden accident in the imperial palace frightened Empress Eudoxia, and raised her fears of some punishment from heaven for the exile of Patr. John. She immediately ordered Chrysostom’s recall. Initially, Chrysostom was reluctant to return to Constantinople. But, when he did return he was met with great rejoicing by the people that caused intense fear among Theophilius and his supporters. To save themselves they fled the capital. [4]

However, the failed attempt at “The Oak” did not deter Chrysostom's enemies. They persisted in their attempts to unseat him. On June 24, 404, they again succeeded in having him deposed and exiled a second time. As he laid dying on the road to exile, the last words that the sainted John Chrysostom, delivered were "Glory be to God for all things!"